Vivo V9's India launch has been rescheduled to March 23. The smartphone was previously expected to launch in the country on March 27, however, Vivo on Wednesday sent out a revised invite to the media that confirms the new schedule. This aligns with the global launch of the Vivo V9 that is planned in Thailand for March 22, just a day ahead of the advanced India launch. The smartphone is already teased with a vertically-placed dual rear camera setup and a near-bezel-less display panel with a notch - both matching the design language of the iPhone X.

The revised invite circulated by Vivo doesn't reveal any further details about the Vivo V9. It does give a glimpse of the vertical dual rear camera setup, as before. The handset also recently got listed on an e-commerce website in Indonesia that revealed its price of IDR 4,999,000 (approximately Rs. 23,700). The online listing additionally mentioned some specifications, including a 6-inch full-HD+ (1080x2160 pixels) AMOLED display, Snapdragon 660 SoC, 4GB RAM, 64GB onboard storage, and the dual rear camera with 12-megapixel and 8-megapixel image sensors. Further, the handset is rumoured to run Android 8.0 Oreo-based FunTouch OS 4.0. 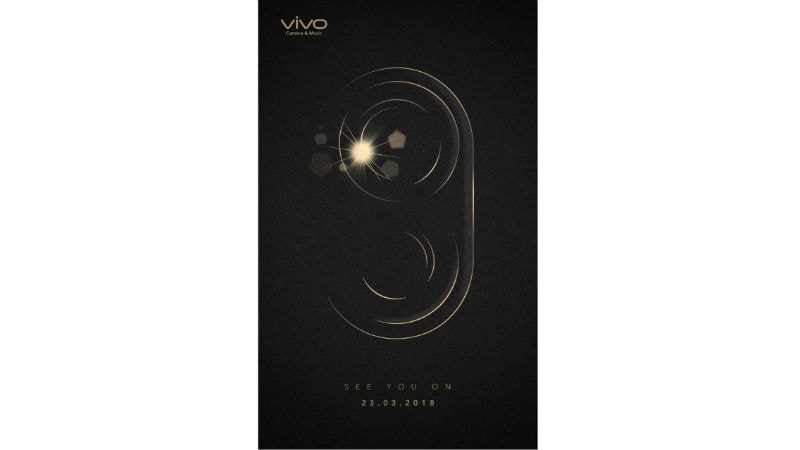 For capturing selfies, the Vivo V9 is claimed to have a 24-megapixel wide-angle camera sensor on the front. It is also said to have features such as facial unlock, fingerprint sensor, and fast charging support.

As per retail box of the Vivo V9, which has lately been spotted on Twitter, the smartphone will come with FIFA World Cup 2018 branding. Also, the box appears quite similar to iPhone packaging.

Further reading: Vivo V9, Vivo, India, Mobiles, Android
Jagmeet Singh Email Jagmeet Jagmeet Singh writes about consumer technology for Gadgets 360, out of New Delhi. Jagmeet is a senior reporter for Gadgets 360, and has frequently written about apps, computer security, Internet services, and telecom developments. Jagmeet is available on Twitter at @JagmeetS13 or Email at jagmeets@ndtv.com. Please send in your leads and tips. More
Broadcom Said to End Bid for Qualcomm, Keep Plan to Move to US
Firefox 59 Released With Faster Load Times on Desktop, HLS Support on Android