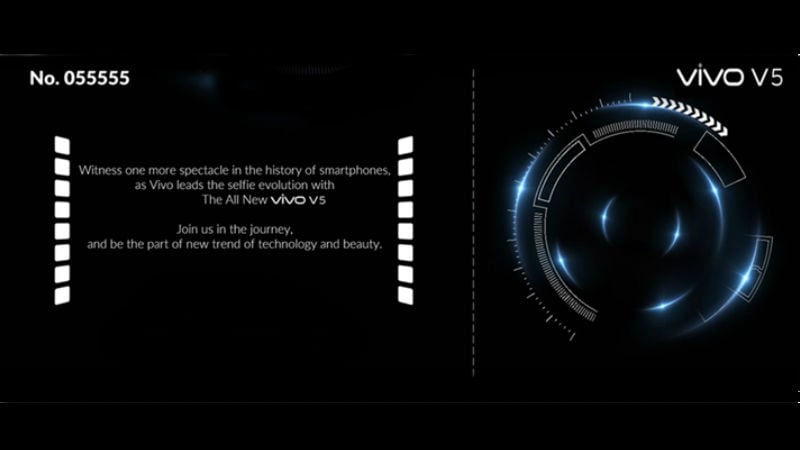 Vivo has sent out invites for the launch event of its upcoming Vivo V5 smartphone in India. The event will be held in Mumbai on November 15, and the smartphone is expected to be the successor of the Vivo V3 smartphone launched in April. The Vivo V5 is expected to sport significant upgrades from its predecessor, most notably in the camera department.

The invite sports an image of a lens, indicating that upgrades on the camera front are imminent. Furthermore, the invite reads, "Witness one more spectacle in the history of smartphones, as Vivo leads the selfie evolution with the all new Vivo V5." This indicates that an improvement of the front camera is more prominent, than probably the one at the back.

In the meanwhile, PhoneRadar has leaked a render that reveals the smartphone's design and key specifications. If the image is to be believed, the Vivo V5 will sport a 20-megapixel selfie camera with softlight LED flash support. Furthermore, the report states that the smartphone will feature a 5.2-inch full-HD (1080x1920 pixels) display. It will sport a 4GB RAM and offer 32GB of inbuilt storage. The fingerprint sensor will be embedded under the Home Button below the display. The Vivo V5 can be expected to launch in Gold, and Rose Gold colour variants.

Just like most of the previous Vivo phones, the latest smartphone will also offer HiFi audio output. The pegged price range that the Vivo V5 will reportedly sit in is somewhere between Rs. 20,000 and Rs. 25,000. Just to put things into perspective, the Vivo V3 was launched alongside the Vivo V3 Max, and both the smartphones were priced at Rs. 17,980 and Rs. 23,980 respectively.