Vivo V20 Series Confirmed to Launch in India Soon, to Be Offered via Flipkart

Vivo V20 series of smartphones expected to be launched on October 12 in the country.

Vivo V20 series of smartphones has officially been confirmed by the company to launch in India. The company's India Twitter handle has posted a short teaser video, hinting at the phones' imminent launch in the country. A promotional page for the Vivo V20 was also spotted on the Flipkart app, hinting at its availability on the e-commerce platform soon. It was earlier reported that the Vivo V20 series is expected to be launched in the country on October 12. The Vivo V20 series comprises three models – Vivo V20, Vivo V20 SE, and Vivo V20 Pro. The Vivo V20 SE and the Vivo V20 Pro has already been launched earlier this month in Malaysia and Thailand, respectively. Not many details have been revealed around the vanilla Vivo V20 but it is likely to share a number of specifications with the Pro model.

Vivo tweeted a short teaser video of the upcoming phones through its India handle (@Vivo_India). The post hints at the phones' ultra-slim design and doesn't reveal much else. The cover photo on the Twitter profile page highlights the upcoming series, offering a glimpse into its three expected colour options – black, white, and a blue-purple gradient hue.

Tick, tock. Tick, tock.????
Time's up for bulky smartphones! Are you ready for an ultra-slim delight? #ComingSoon #DelightEveryMoment #vivoV20Series pic.twitter.com/Fb2rMTHnXo

The Vivo V20 series has also been listed on the Vivo India website. It teases the impressive camera features of the upcoming phones and allows interested customers to sign up for updates.

The Vivo V20 has been listed in a promotional page on the Flipkart app. While it doesn't reveal any details on the launch date or the pricing in India, it does feature a ‘Notify Me' button for updates. The Vivo V20 series is also expected to be available for purchase via offline partner retail stores. 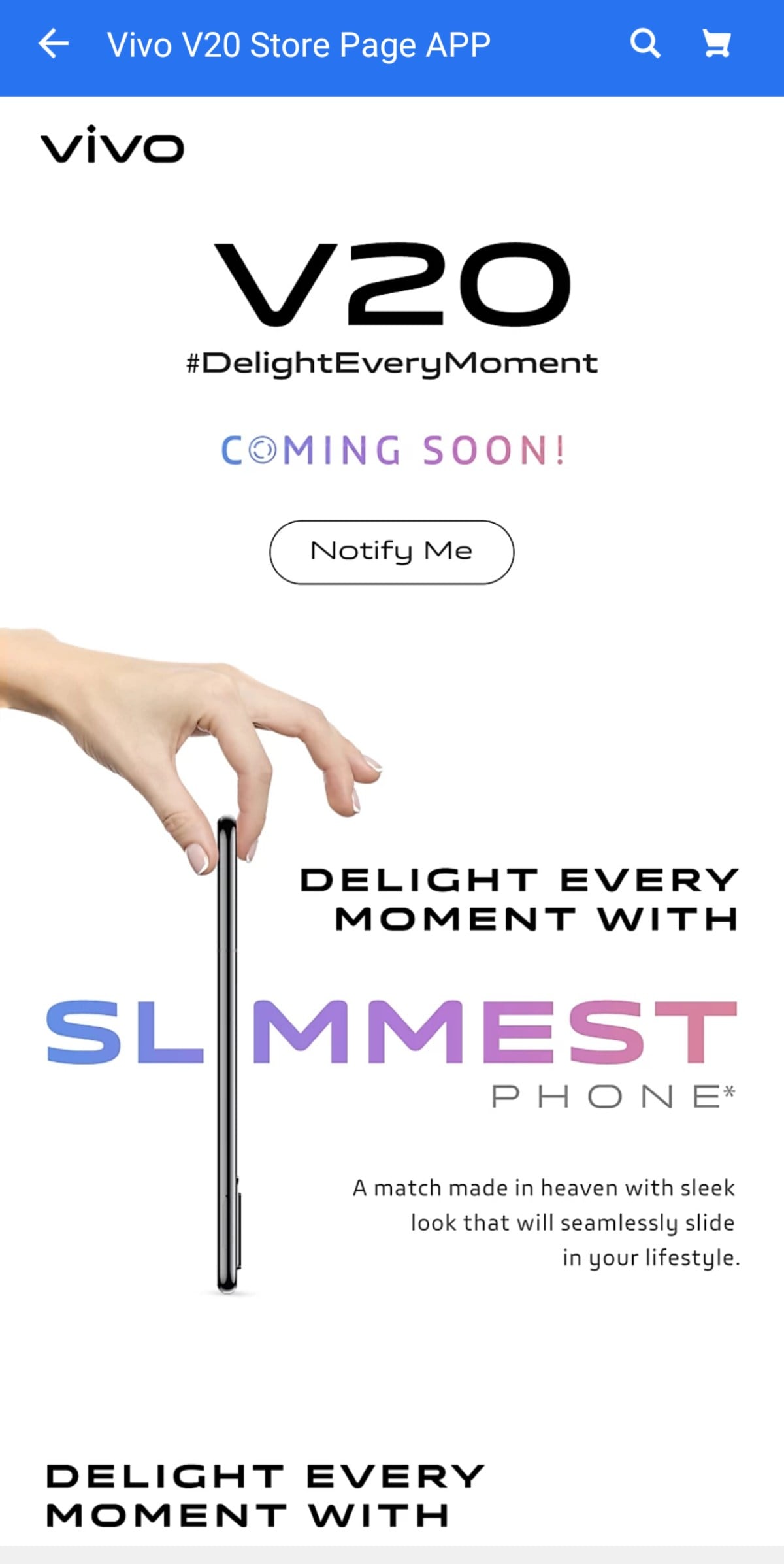 An earlier report claimed that the Vivo V20 series will launch in India on October 12. However, it should be noted that only two of the three smartphone models in the series are expected to be launched in the country, according to the report.

No release date or pricing details have officially been announced by Vivo.

The Vivo V20 SE has already been launched in Malaysia. Key specifications on the phone include a triple rear camera setup highlighted by a 48-megapixel primary snapper and a thin 7.83mm build. The Vivo V20 Pro also debuted at an event in Thailand. It comes with a dual selfie camera and is powered by the Qualcomm Snapdragon 765G SoC. All three models in the Vivo V20 series run on Funtouch OS 11, based on Android 11.

Further reading: Vivo V20 Series, Vivo V20, Vivo V20 SE, Vivo V20 Pro, Vivo V20 SE Launch, Vivo V20 Pro Launch, Vivo
Shayak Majumder Email Shayak Majumder Shayak Majumder is Chief Sub Editor at Gadgets 360. A journalist since 2013, he has worked both on the field as well as behind the desk in several organisations including Indian Express Online and MSN. As a reporter, he covered a wide range of verticals, from politics to the development sector. While at Indian Express, he regularly reviewed video games, gaming hardware and the growth of MMORPG in India. He is also a passionate musician and a former trainer, currently working on his upcoming EP. ...More
Google Pixel 5, Pixel 4a 5G Launching Today: How to Watch Live Stream, Expected Price and Specifications

Vivo V20 Series Confirmed to Launch in India Soon, to Be Offered via Flipkart
Comment
Read in: हिंदी