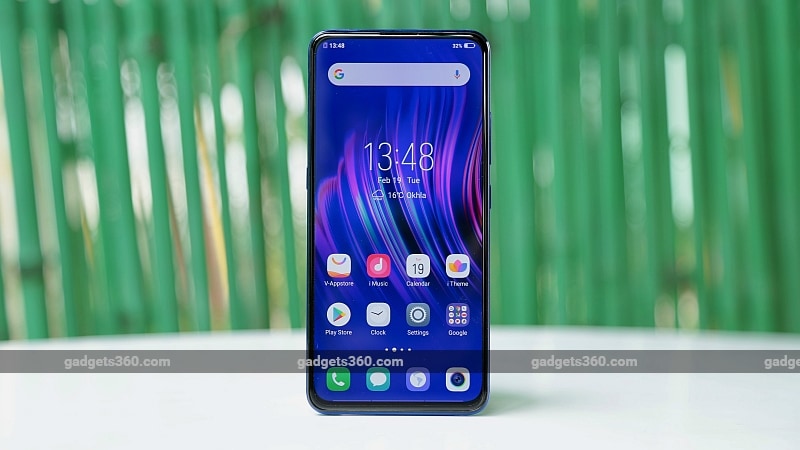 Vivo V15 Pro with a pop-up selfie camera module was launched in India on Wednesday. The front camera features a massive 32-megapixel image sensor. At the back, the V15 Pro houses a triple camera setup - another major highlight of the smartphone. Vivo has also provided an Ultra FullView Display panel on the V15 Pro that comes with a 19.5:9 aspect ratio. The Vivo V15 Pro also has a fifth-generation in-display fingerprint sensor and a Snapdragon 675 AIE SoC. The Vivo V15 Pro price was unveiled at the event in New Delhi on Wednesday, while the company also revealed that it will go on sale in the first week of March, and detailed launch offers as well.

The Vivo V15 Pro price in India has been set at Rs. 28,990 for the lone 6GB RAM/ 128GB storage model. The smartphone comes in Topaz Blue and Ruby Red colour options. Moreover, it will go on sale through Amazon.in, Flipkart, Paytm Mall, Snapdeal, and Vivo India online store as well as a list of offline retailers, starting March 6. Pre-bookings open from today, February 20.

The USP of the Vivo V15 Pro is the pop-up selfie camera that makes it similar to the Nex that was launched in India last year. The pop-up selfie camera offers features such as portrait lighting effects and AI-based beautification, apart from face unlocking. The smartphone also comes with a 'fifth-generation' in-display fingerprint sensor that is touted to have higher fingerprint pixel density and more sophisticated algorithms over its previous generation to deliver a faster and more secure unlocking experience. Further, the handset comes with a Spectrum Ripple Design that comes with two distinct colour options.

For images and videos, the Vivo V15 Pro has a triple rear camera setup that has a 48-megapixel primary Quad Pixel sensor (enabling 12-megapixel effective pixels) with an f/1.8 lens, along with an 8-megapixel secondary, AI Super Wide-Angle sensor with an f/2.2 aperture, and a 5-megapixel tertiary, depth sensor with an f/2.4 aperture. The rear camera supports features such as AI Body Shaping and AI Portrait Lighting. For selfies, there is a 32-megapixel camera sensor sitting under the pop-up camera module.

The Vivo V15 Pro has 128GB of onboard storage that is expandable via microSD card (up to 256GB). Connectivity options include 4G VoLTE, Wi-Fi 802.11 a/b/g/n, Bluetooth v5.0, GPS/ A-GPS, Micro-USB port, and a 3.5mm headphone jack. The smartphone has an in-display fingerprint sensor, apart from an accelerometer, ambient light sensor, digital compass, gyroscope, and proximity sensor. Besides, it packs a 3,700mAh battery that supports Dual-Engine fast charging technology that is touted to charge from 0 to 24 percent in 15 minutes. It measures 157.25x74.71x8.21mm and weighs 185 grams.

Huawei P30 Pro's Quad Rear Camera Setup Confirmed by CEO via Sample Photo
Password Managers Have a Security Flaw, but You Should Still Use One: Report