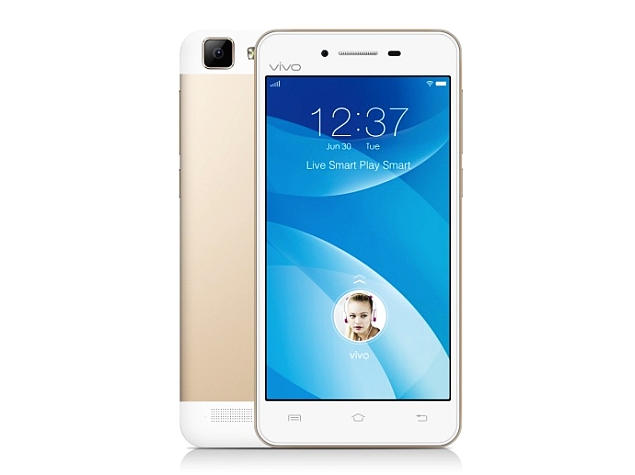 Chinese handset brand, Vivo on Tuesday introduced its new Vivo V handset series, with the launch of the Vivo V1. The smartphone would hit the shelves later this month, but the company has not provided pricing beyond the entire series, which will be between Rs. 15,000 and Rs. 20,000.

The dual-SIM Vivo V1 runs its own Funtouch 2.1 UI on top of Android 5.0 Lollipop and features a 5-inch HD (720x1280 pixels) resolution display. The handset packs a quad-core 64-bit Qualcomm Snapdragon 410 processor clocked at 1.2GHz, along with 2GB of RAM and Adreno 306 GPU.

On the camera front, the Vivo V1 packs a 13-megapixel rear camera with LED flash and a front 5-megapixel camera, the same camera setup seen in its flagship smartphone the Vivo X5 Max. The smartphone's front-facing camera houses a wide-angle lens with 6P lenses and an f/2.0 aperture. Different camera modes including Night mode and Panorama is also present. The 16GB inbuilt storage on the V1 is expandable via microSD card (up to 128GB).

Vivo has also included a bigger 2300mAh battery in the metal-clad V1 that is significantly bumped up from the 2000mAh one on the flagship X5Max. The V1 also feature a Stamina mode that extends the life of the handset.

Connectivity options on the Vivo V1 include 4G LTE, Bluetooth, Wi-Fi, Micro-USB, and GPS/ A-GPS. The handset will be available in Silver and Gold colour variants. Vivo also announced the V1 Max is set for a launch in India, but did not provide availability details, specifications, or pricing.

"We are pleased to announce the launch of our new Smartphone series. With 'V' Series we bring unbeatable proposition, price and products in the mid-segment category. Our first device in the category, vivo V1 incorporates cutting-edge technologies, exclusive music features and the highest quality camera shots," said Alex Feng, CEO of Vivo Smart Phone India during the launch.