Vivo Nex has been officially teased ahead of its formal launch scheduled for June 12. The official teaser confirms that the new handset will debut with a pop-up selfie camera, identical to the one featured on the Vivo Apex that was unveiled at MWC 2018 as a concept back in February. The latest development emerges just after three variants of the upcoming smartphone surfaced on China's 3C certification site. All these variants, spotted as the Nex A, Nex S, and Nex, are likely to support fast 5V/2V, 9V/2A, and 10V/2.25A charging over USB Type-C.

The teaser, which has been posted by Vivo on its formal Weibo account, confirms the presence of a pop-up selfie camera that will elevate from the top. The initial appearance of the uniquely designed selfie camera was first spotted on the Vivo Apex concept at MWC 2018. Vivo notably launched the Apex in China as its new top-notch offering in March, but said mass production would begin in mid-2018. While Vivo hasn't said so in as many words, the Vivo Nex is presumably the mass production model of the Apex.

Alongside revealing the pop-up camera, the latest teaser highlights that the Vivo Nex will offer a redefined camera experience that will be powered by some artificial intelligence (AI) features. We can safely say that the smartphone will have some selfie-focused enhancements. 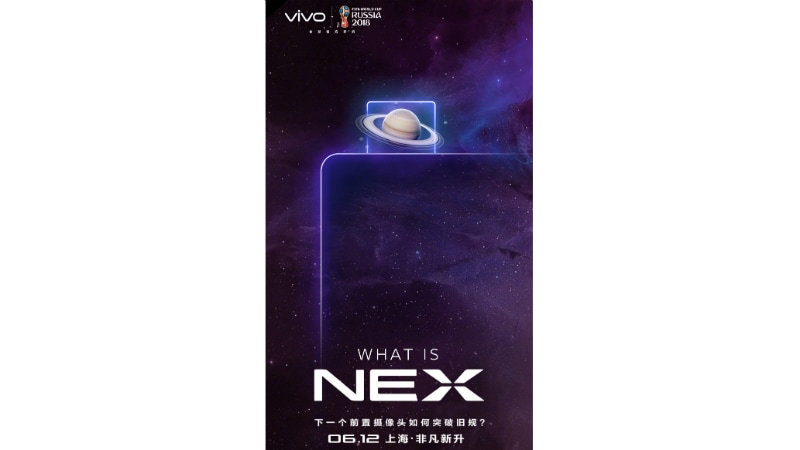 Earlier this month, Vivo posted an image through its Weibo account to confirm the developments around the Vivo Nex. That image suggested a half-screen fingerprint scanner - again, the one that was first featured on the Vivo Apex.

As per the listing spotted on the 3C certification site, there will be three variants of the Vivo Nex. The most premium Nex variant is rumoured to come at CNY 6,998 (approximately Rs. 73,200), while the cheaper variant could be priced at CNY 4,998 (aroundRs. 52,300). The handset is rumoured to come with a 5.99-inch display with an 18:9 aspect ratio. It is also expected to have an embedded ambient and proximity sensors under the display. The pop-up selfie camera is said to have 8-megapixel resolution and elevate from the body in just 0.8 seconds.