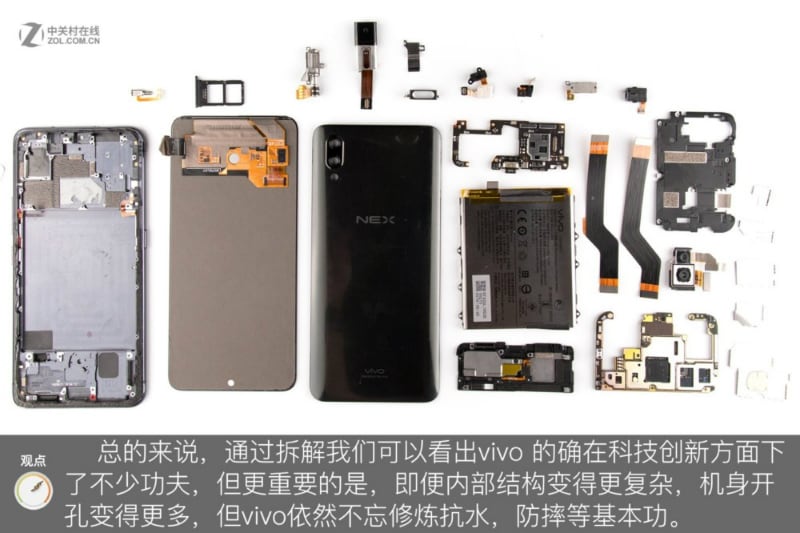 Vivo Nex S and Vivo Nex A were launched in China as the company's latest flagship smartphones earlier this month, and the big highlight was its 91.24 percent screen-to-body ratio. To make room for all the screen, the company has integrated a motorised pop-up camera in both the phones. The Vivo Nex S is the premium model, and features a Snapdragon 845 SoC, 8GB RAM, up to 256GB inbuilt storage, and an in-display fingerprint sensor. This smartphone variant has endured a teardown, revealing how the pop-up selfie camera works, how the company has removed the earpiece and managed to make sound travel through the display, and also how the in-display fingerprint reader works.

Folks at MyFixGuide published the teardown, showing off all the inner components of the Vivo Nex S. Starting with the pop-up camera, the smartphone has a motorised slider with the camera sensor, that moves up and down from the body with the help of a spring-loaded motor. It uses a silvers spiral stepper to push the camera up, and while the final function is very smooth, it is also prone to failure. The only option for repairing it is to send it back to Vivo.

The author claims that opening the Nex was a challenge as well, as he had to melt the adhesive sticking the phone using heat, and then use a sucker to remove the back cover. Somehow, that managed to remove the display instead. In any case, once the display is removed, the fingerprint tech underneath the display is revealed. The tech uses a special short-focus camera to read the user's fingerprint. This is different from what Vivo uses on the Vivo X21 UD. The Nex does not have the half-screen fingerprint scanner as shown on the concept Vivo Apex phone. However, the company claims the Vivo Nex S comes with the third-generation under-display fingerprint sensor that is claimed to be 10 percent faster with 50 percent improved accuracy.

A more violent method involving a knife was then used to pry open the back cover. The smartphone has not used the traditional earpiece in order to give up on the notch display. Instead, a vibration motor that sends sound through the display has been used. The report claims that the end result may even be better than what the Xiaomi Mi Mix's piezoelectric ceramic vibration achieves.

With the Nex S, Vivo has managed to do great aesthetic justice, but its durability and repairability do suffer. Some of the parts used on the phone may not be easily available in the market, making it lose more points. Furthermore, opening the phone is a huge task, making it more difficult to repair.

As mentioned the Vivo Nex S is the premium model, however there is another cheaper Nex A model launched as well. The Nex A comes with Snapdragon 710 SoC, 6GB RAM, 128GB inbuilt storage, and uses a rear fingerprint sensor instead of the in-display one.

'I've Never Seen Anything Like This': Astronomers Dazzled by Brilliant Supernova
Apple News Gets Special Section Dedicated to US 2018 Mid-Term Elections