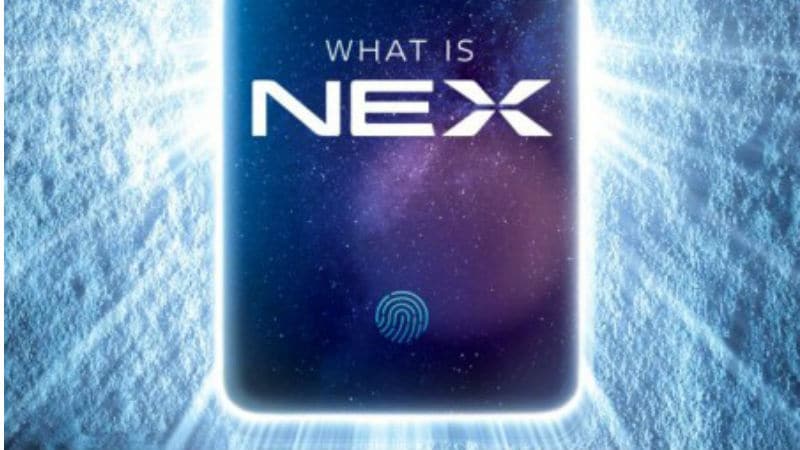 Vivo Nex will be the name of the much-awaited bezel-less display smartphone, heretofore known as the Apex concept phone. Last week, the mobile maker had confirmed that it will be hosting a launch event in Shanghai on June 12 to launch a bezel-less display smartphone, indicating a possible launch of its Vivo Apex concept phone. Recent reports had already suggested a rebranding was in the works. To recall, the Vivo Apex with a 91 percent screen-to-body ratio, half-screen fingerprinting scanning tech, and an elevating (or pop-up) selfie camera made its initial appearance as a concept phone at MWC 2018 and its formal announcement was made in March this year.

The latest piece of information about the upcoming Vivo smartphone is in line with an earlier report that claimed that the commercial name for this truly bezel-less device is expected to be Nex. Now, the company has released a new poster on Chinese microblogging site Weibo to confirm the Vivo Nex name as well as the launch date.

As per the teaser, the rebranded Vivo Apex handset will come with a breakthrough technology, hinting at the half-screen fingerprint scanner, screen-to-body ratio, and other advanced features. In another post on Weibo itself, Vivo detailed some of the features of the Nex. Also, a Weibo user had posted some images allegedly from a retail store in China, where the smartphone variant powered by Snapdragon 845 cost as much as CNY 6,998 (roughly Rs. 73,200), GSMArena reports. Also, the hand-written board tips that the handset will have a cheaper variant that will come without the pop-up camera priced at CNY 4,998 (roughly Rs. 52,300). However, the particular image showcasing the price seems to have been removed from the platform. The SKUs and pricing tipped are slightly different from the previous report.

A recent report had indicated that the Vivo may launch two variants of the Nex smartphone. The more premium variant will have the pop-up front camera on top, will be powered by the latest Snapdragon 845 processor paired with 8GB RAM and 256GB inbuilt storage, priced at CNY 4,999 (roughly Rs. 52,600). The other variant will be powered by the Snapdragon 660 processor paired with 6GB RAM, 128GB internal storage, and have no pop-up camera. Instead, it will have the selfie lens embedded in the bottom chin. It is said to be priced at CNY 3,798 (roughly Rs. 40,000).

While Vivo has not revealed too many details about the smartphone, reports have previously claimed that the Apex will sport a 5.99-inch display with 18:9 aspect ratio. To deliver a full-screen user experience, the Vivo Apex also has embedded ambient and proximity sensors under the display. An interesting feature of the Apex phone is that the top of the handset features a hidden 8-megapixel selfie camera that is claimed to elevate from the body in just 0.8 seconds. The camera also reportedly includes an artificial intelligence (AI) algorithm and features such as smart optimisation, ultra-dynamic, multi-frame preferences, character optimisations, and natural tones.