Given Vivo’s pattern, the Nex 3S 5G will probably not make it to the Indian market. 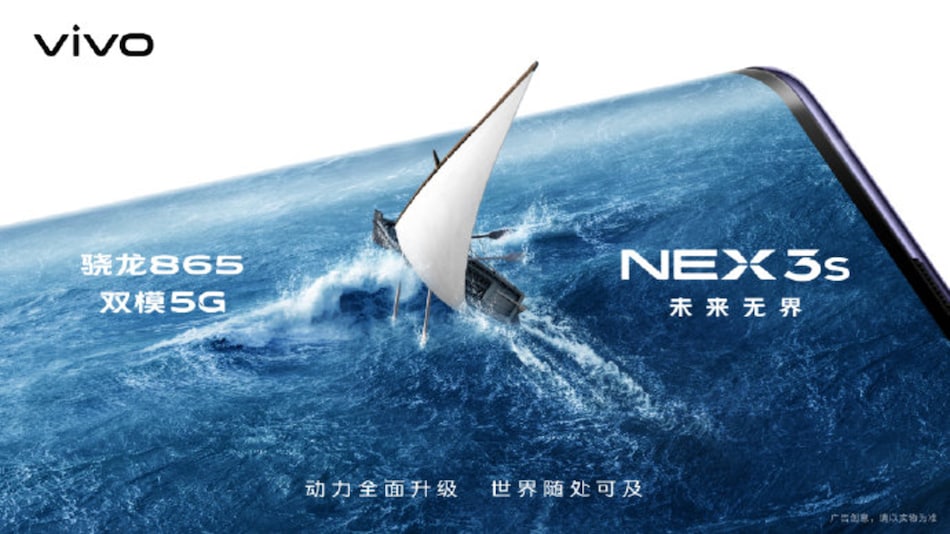 Vivo Nex 3S 5G, an upgrade to the Vivo Nex 3 5G is set to launch on March 10, the company had announced on its Weibo account earlier this week. Now, the company has also shared a few official teasers for the phone that focuses on the phone's waterfall display and reveal the presence of Qualcomm's 5G-enabled Snapdragon 865 SoC. The phone will probably not make it to the Indian market, given Vivo's track record when it comes to its flagship range of Nex smartphones.

The official teaser for the Vivo Nex 3S 5G that was released on the company's Weibo account teases the Vivo phone's "unbounded waterfall screen."

The company has also confirmed a blue colour scheme for the phone, triple camera setup, and Snapdragon 865 SoC on the upcoming Nex 3S 5G. The blue colour was also revealed via an official teaser on Vivo's Weibo account.

Although the phone will reach the Chinese stores, soon after March 10 launch, Vivo Nex 3S 5G is not expected to make it to the Indian market, as Vivo has not brought the last two versions of its flagship device to India.

In terms of the specifications, the upcoming Vivo phone's screen is expected to be similar to the 6.89-inch AMOLED panel on the Vivo Nex 3 5G.

As far as the cameras go, the Vivo V1950A's TENAA listing suggested that it will pack a triple rear camera setup that will include a 64-megapixel main camera, assisted by a pair of 13-megapixel snappers. Selfies will be handled by a 16-megapixel camera, and if the rumours turn out to be true, the front camera will be housed in a waterdrop-style notch.