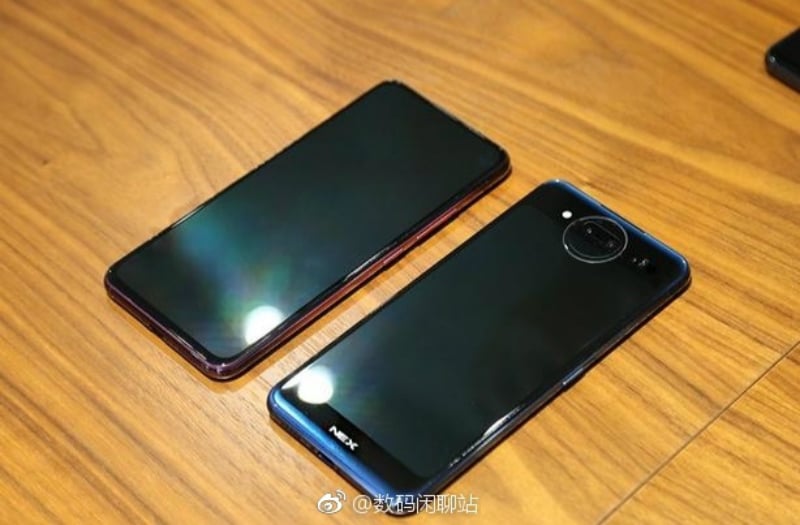 The first Vivo Nex grabbed headlines for its true bezel-less display design and pop-up motorised selfie camera setup. In a bid to keep the uniqueness alive, Vivo is said to be bringing two screens on the upcoming Vivo Nex 2. The device seems to have taken inspiration from the recently launched Nubia X, and now it has been spotted on GeekBench with 10GB RAM and Android Pie software. The Vivo Nex 2 has also been leaked in photos once again, and this time specs have also leaked alongside.

The Vivo Nex 2 has been spotted on GeekBench with model number Vivo V1821A and it is listed to sport 10GB RAM., reiterating previous leaks. The listing suggests that the smartphone will sport a Snapdragon 845 processor, and not the new Snapdragon 855 SoC launched recently. Furthermore, the smartphone is listed to run on Android Pie out-of-the-box.

The images leaked on Weibo are similar to the renders and photos leaked in the past, and they show two screens - one in the front and one at the back. There's no front camera, but there are three cameras supported with a flash at the back. There's also a ring-shaped fill light at the back of the device. The tipster notes that the Vivo Nex 2 will sport one 6.56-inch bezel-less display up front, and a smaller 5.5-inch display at the back as well. The tipster reiterates that the smartphone will not sport a Snapdragon 855 processor, and suggests that the battery will also shrink in size, when compared to the predecessor, to make room for the second screen.

In any case, the Vivo Nex 2 is set to launch on December 11, and the company has already started taking registrations in China. The smartphone is also being teased regularly running up to the launch, and it's only a matter of time, before all the details become official.