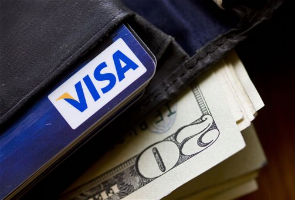 The "wallets," coming this fall, are one step in the process of updating today's system for credit and debit cards. They'll work with new smartphones equipped with chips that can talk to some credit-card terminals already in stores.

Visa doesn't issue cards, despite its logo on them. Rather, it processes payments for banks that issue Visa-branded cards. It said banks that support the "wallet" strategy include U.S. Bancorp, TD Bank Group, BB&T Corp., PNC Bank and Barclaycard U.S.

Visa had already signalled that it would promote an "open wallet" model for payments using cellphones. That would let consumers add any compatible card to their cellphones, then tap them to terminals at retail outlets to pay. Visa says compatible cards include those from rivals MasterCard Inc. and American Express.

MasterCard and a consortium formed by phone companies T-Mobile USA, AT&T Inc. and Verizon Wireless have plans for their own "wallets."

In extending the "wallet" model to online shopping, Visa would compete with eBay Inc.'s PayPal and Google Inc.'s Checkout, both of which allow users to add multiple cards and use them to pay on various sites. However, Visa has a much larger network of sites that accepts its cards.
Comments