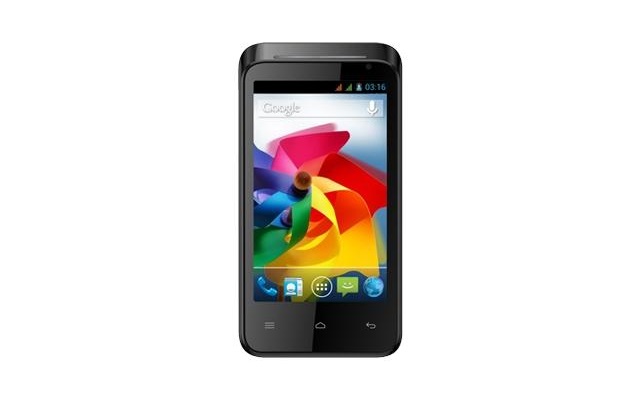 Videocon has launched a new budget smartphone in the Indian market, the Videocon A24 for Rs. 4,699.

The device features a 4-inch WVGA display with a resolution of 480x800 pixels. It is powered by a 1.2GHz dual-core processor coupled with 256MB of RAM. The device includes a 3.2-megapixel rear camera accompanied by an LED flash and a 0.3-megapixel front facing camera. It runs Android 4.2.2 Jelly Bean and supports dual SIM (GSM+GSM) with dual standby. Connectivity options include Wi-Fi, Bluetooth, GPRS, EDGE, 3.5mm audio jack and A-GPS.

It packs a 1450mAh battery that the company claims, delivers up to 4 hours of talktime. The device also includes 512MB internal storage that can be expanded up to 32GB with the help of a microSD card.

The company has preloaded some apps on the Videocon A24 including V Store, TOI, Hungama, Fun Zone, Skype, Facebook and WhatsApp. Other features include FM Radio with recording, and G Sensor. The handset will be available in two colour variants - White Chrome and Black.

Recently, Lava also listed two budget smartphones under the Iris range, the Iris 356 and Iris 402 priced at Rs. 4,499 and Rs. 5,499 respectively. However, both the devices are not available in physical stores or online retailers at the moment.

The Lava Iris 356 features a 3.5-inch HVGA display with a resolution of 320x480 pixels and is powered by a 1.2GHz dual-core processor with 256MB RAM. The device runs Android 4.2 Jelly Bean. There is a 1.3-megapixel rear camera with flash and a VGA front-facing camera. It supports dual SIM (GSM+GSM).

The Lava Iris 402 sports a 4.0-inch WVGA display with a resolution of 480x800 pixels. The device is powered by 1.2GHz dual-core processor with 256MB RAM and runs Android 4.2 Jelly Bean. It boasts of a 3-megapixel rear camera with flash accompanied by a VGA front-facing camera.

Of late, the budget smartphone segment has is seeing some action with handset manufacturers launching new phones in the sub Rs. 5,000 segment. Recently, Intex also launched the Cloud X3 smartphone at a competitive price of Rs. 3,790.