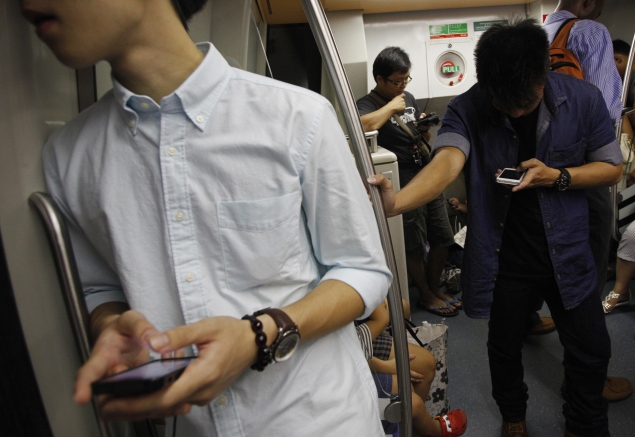 US smartphone owners tend to be connected from the instant they rise until they fall sleep and revel in every minute of it, a Facebook-sponsored study showed.

"Smartphones, coupled with rich applications and mobile data services, allow us to connect with our family, friends and community from the moment we wake up until the end of our day," IDC researchers said in the report released this week.

"Rather than feeling overwhelmed by it, we enjoy and value this increased social connectedness."

About half the US population uses smartphones, with the number of people expected to reach 181.4 million this year and climb to 222.4 million in the coming four years, according to IDC.

A week-long IDC survey of more than 7,000 people ranging in age from 18 to 44 years old with iPhones or Android-powered smartphones showed that four out of five check their handsets within 15 minutes of waking.

The top three applications used were for messaging; Web browsing, and Facebook, in that order, according to IDC.

"People have a universal need to connect with others, especially those they care deeply about," IDC researchers said.

"This coupled with mass market adoption of smartphones means that social engagement via phones has become mainstream."

About 84 percent of the time spent communicating with smartphones involved email, text messages, or social networks while only 16 percent relied on voice calls, the survey indicated.

"This increased sense of connectedness is the primary reason we use these technologies with the frequency and duration that we do," IDC researchers concluded.

Internet connectivity in India likely to stay affected for two weeks: Report
Mike Lazaridis prepares to leave BlackBerry, but board wants him to stay