The Spice Stellar Mi-600 is currently listed as ''out of stock", while there is a 'Notify Me' option for interested customers. We are yet to hear any official announcement from Spice regarding the new Stellar Mi-600.

The Stellar Mi-600 is a dual-SIM (GSM+GSM) device and unlike other Stellar Android handsets, runs Android 4.4.2 KitKat out-of-the-box. It features a 6-inch qHD (540x960 pixels) IPS display and is powered by a 1.3GHz quad-core processor (unspecified chipset) alongside 1GB of RAM. 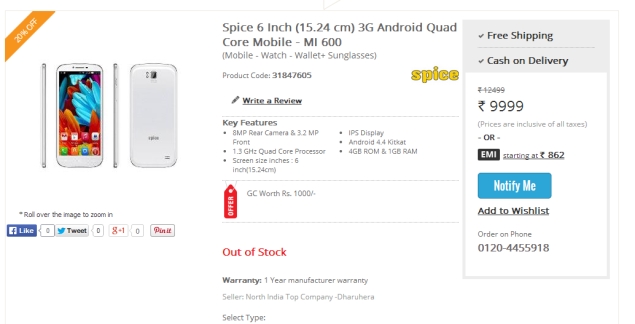 It sports an 8-megapixel rear camera with LED flash, while it also houses a 3.2-megapixel front-facing camera. The smartphone includes 4GB of inbuilt storage which is further expandable up to 32GB via microSD card.

The Spice Stellar Mi-600 packs a 2500mAh battery, which is rated to deliver up to 4 hours of talk time and up to 192 hours of standby time. The smartphone comes with GPRS/ EDGE, 3G, Wi-Fi 802.11 b/g/n, Bluetooth, GPS and Micro-USB connectivity options. The smartphone is available in Black and White colour variants and measures 149.4x74.9x9.3mm, weighing 175 grams. It is listed on Homeshop18.