While Sony is getting ready for its pre-IFA 2014 event on Wednesday, September 3, two of its anticipated launches - the Sony Xperia Z3 and new QX series lens-style cameras - have been leaked in a purported press render.

The images posted by Xperiablog on Tuesday are claimed to show the yet-to-be-announced Xperia Z3 flagship and 'QX1' lens-style camera with an E-Mount attachment. While the report doesn't feature any specifications for both the devices, it speculates that QX1 lens camera will use an Exmor APS-C sensor and 'some kind of pop-up flash.' 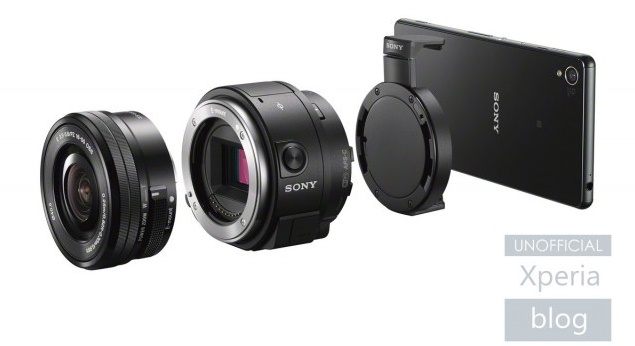 This year, Sony is expected to unveil a range of new devices at its September 3 event, and if a previously tipped Sony press invite image is to be believed this could be more than one smartphone, a lens camera, speakers, a television, and some sort of stand.

So far, Sony is separately rumoured to launch three smartphones, two wearables, and a tablet at IFA 2014. Along with the previously rumoured Xperia Z3, Xperia Z3 Compact and Xperia Z3 Tablet Compact devices, a new report on Monday tipped Sony to launch the SmartWatch 3 and SmartBand Talk wearables at IFA 2014, alongside a budget smartphone offering dubbed Xperia E3 that is expected to retail between $200 (approximately Rs. 12,000) and $300 (approximately Rs. 18,000).

The Japanese giant has also released an official video teaser last week with numerous hints, followed by a teaser image on Sunday, suggesting water-resistance in at least one of the devices it will introduced at IFA, supporting immersion up to 2 metres.
Comments