Share on Facebook Tweet Snapchat Share Reddit Email Comment
Sony has launched two new Xperia smartphones at CES 2014, the Xperia Z1 Compact, the much-awaited international mini-variant of the flagship smartphone, Xperia Z1 and the long-rumoured Xperia Z1S, which we now learn is a full-sized Xperia Z1-variant exclusive to T-Mobile in US.

While, Sony has announced that the Xperia Z1S will be available in US through T-Mobile starting January 22 and will be priced at $22 per month for two years or will be available at $603 outright (without contract), this translates to roughly Rs. 37,500.

Notably, the Sony Xperia Z1S comes with similar specifications to the Xperia Z1, though the former comes with a higher IP58 waterproof rating, which means the device, can be submerged into water for more time and depth.

The Sony Xperia Z1S runs Android 4.3 Jelly Bean out-of-the-box with Sony's custom skin on top, similar to the one seen on the Xperia Z1. The latest smartphone is powered by 2.2GHz quad-core Qualcomm MSM8974 processor along with 2GB of RAM. There is 32GB of inbuilt storage, although no word on expandable storage.

The Sony Xperia Z1S comes with 5-inch full-HD Triluminos display powered by Sony Mobile BRAVIA Engine 2. The highlight of the Xperia Z1S, much like the flagship smartphone, is the 20.7-megapixel Exmor RS sensor alongside BIONZ image processor engine and pulsed LED flash. It also includes a 2-megapixel front-facing camera. Like to the Xperia Z1, the device comes with 3000mAh battery. Connectivity options on the Xperia Z1 include Wi-Fi, Bluetooth, NFC, Xperia Link and 3G. 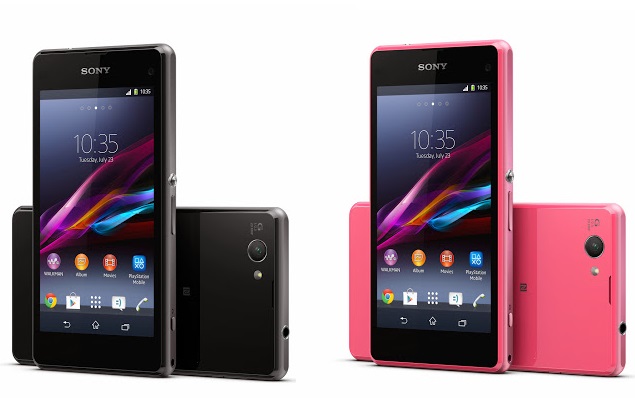 The Xperia Z1 Compact runs Android 4.3 Jelly Bean and is manufactured by a single aluminium frame with tempered glass on the back and front panels. It is powered by a 2.2GHz quad-core Qualcomm MSM8974 processor along with 2GB of RAM, much like the elder sibling, Xperia Z1.

The Sony Xperia Z1 Compact features a 4.3-inch Triluminos HD (720x1280) display with X-Reality for Mobiles. It comes with 16GB of inbuilt storage which is further expandable up to 64GB with the help of microSD card.

The highlight of the Xperia Z1 Compact is again the 20.7-megapixel Exmor RS sensor alongside BIONZ image processor engine and pulsed LED flash, as seen in Xperia Z1. It also includes a 2-megapixel front-facing camera. Connectivity options on the device include Bluetooth, Wi-Fi, GPS/ GLONASS and NFC. The Xperia Z1 Compact packs a 2300mAh battery with STAMINA mode and is waterproof and dust-proof smartphone, like other high-end Xperia smartphones.