Sony Xperia XZ4 will be the company’s new flagship phone

Sony was quiet about its new smartphones at the recently concluded CES 2019 tech fair but that is not going to last long. The Japanese manufacturer has started sending out invites for an event on February 25 in Barcelona at the Mobile World Congress (MWC). The company is expected to showcase its new flagship and mid-range smartphones at the event, including the Xperia XA3 phones and Xperia L3, which were originally speculated to be coming at CES last week. Additionally, a new leak has revealed the design of the aforementioned Sony Xperia XZ4 phone.

As per a report in GizChina, Sony has currently sent out invites for the MWC event to the Russian and Italian tech media outlets. The invite itself doesn't offer any details and just shows the profile of a smartphone, however it is believed that the company will announce the Xperia XZ4, Xperia XA3, Xperia XA3 Ultra and Xperia L3 smartphones at the event. 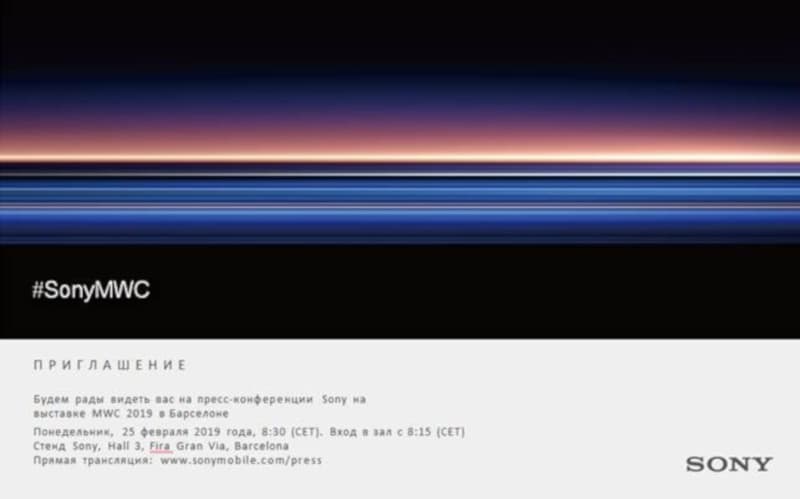 As per previous leaks, Sony Xperia XZ4 will reportedly sport an extra-tall 6.55-inch display with 21:9 aspect ratio. The phone is expected to be powered by Qualcomm's Snapdragon 855 SoC and will include USB Type-C port, and 3.5mm audio jack. There will be a 3,900mAh battery on board as well.

A number of third-party case renders of the Xperia XZ4 have also appeared online, seeming to confirm the previous leaks about the extra-tall screen and 21:9 aspect ratio. The dual-camera setup on the back with dual-LED flash as well as the front camera with single-LED flash can also be seen.

Lastly, the Sony Xperia L3 is likely to come with a 5.7-inch HD+ (720x1440) display with 18:9 aspect ratio, 3,400mAh battery and Qualcomm Snapdragon 660 SoC. Additionally, the phone is said to be packing a dual camera setup on the back with 13-megapixel primary sensor and 5-megapixel secondary sensor.

Sony's February 25 event is scheduled for 8:15am CET (12:45pm IST) and is taking place in Barcelona on the sidelines of the Mobile World Congress.

Further reading: Sony Xperia XZ4, Sony Xperia XA3, Sony Xperia XA3 Ultra, Sony Xperia L3, Sony
Gaurav Shukla Email Gaurav Part of Gadgets 360 news team, Gaurav handles a multitude of responsibilities from covering the latest happenings in the world of science and technology to editing and assigning news stories. In another life, he used to be a technology blogger, writing about Android and its massive ecosystem. Paranoid about online surveillance, Gaurav believes an artificial general intelligence is one day going to take over the world, or maybe not. He is a big Person of Interest fan though. More
Amazon Fire TV Stick Gets Upgraded With Alexa Voice Remote, Goes Up for Pre-Orders in India
Microsoft, Walgreens Partner to Develop Digital Healthcare Services