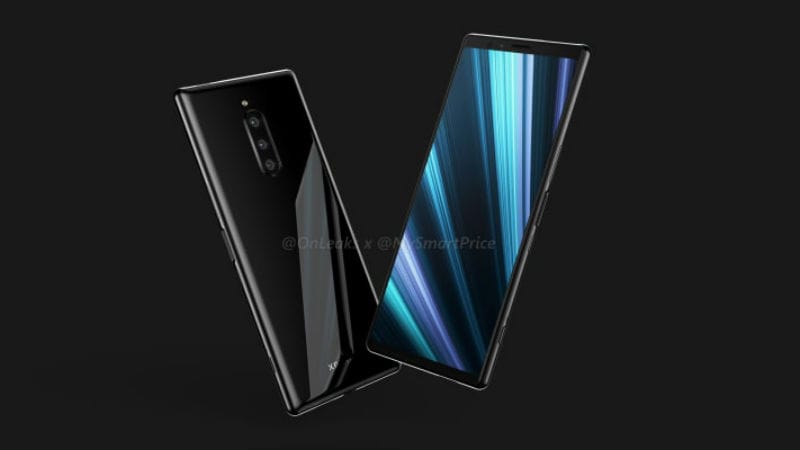 Sony is expected to soon launch a new smartphone in its flagship XZ-Series, as reports surrounding the handset have started churning out of the rumour mill. The design details of the flagship smartphone from Sony, allegedly called Xperia XZ4, have been spotted in a new leak. Some renders based on CAD files and aa 36-degree video of the upcoming Xperia XZ4 provides a closer look at what to expect from the smartphone. While the handset looks quite similar to the previous variant - Xperia XZ3 - the major change in the upcoming model is expected to be the rear camera setup. According to the latest information, the Xperia XZ4 is expected to come with three cameras at the back.

The renders and 360-degree video come to us via reputed tipster OnLeaks, who has been accurate about certain smartphone renders in the past, in collaboration with MySmartPrice. As per the report, the upcoming Xperia XZ4 will come with a triple rear camera setup, a first from Sony. Notably, Sony has only one phone with dual rear camera setup - Xperia XZ2 Premium - and it bears 19-megapixel and 12-megapixel sensors. As of now, details about the camera sensors on Xperia XZ4 are not clear. Meanwhile, at the front, the smartphone features a single camera for selfies.

That display in Xperia XZ4 is expected to 6.5-inch in size and not come with a notch. It also does not seem to have a curved display. For comparison, the Xperia XZ3 has a 6-inch display. Also, the report claims that the handset will retain the 21:9 aspect ratio. In terms of dimensions, the Xperia XZ4 is said to measure 166.9x72.4x8.2mm and the rear camera bump could be 9mm in thickness.

According to the leak, the Sony Xperia XZ4 comes with a power button, a camera shutter button, and volume buttons on the right. Notably, the phone is expected to come with a side-mounted fingerprint scanner. Additionally, the USB Type-C port and speaker grille can be seen positioned at the bottom of the handset while the SIM tray stays at the top. There is no 3.5mm audio jack in the phone.

To recall, Sony had launched the Xperia XZ3 in August this year, following the unveiling of Xperia XZ2 in February 2018. Based on the recent trend of a six-month upgrade cycle, Sony is expected to launch the Xperia XZ4 at Mobile World Congress (MWC) 2019, or even soon, at CES 2019.

Super Smash Bros. Ultimate to Get Day One Patch
NASA Eyes Return to Moon, to Announce Partnerships With US Companies