Sony Xperia T2 Ultra is now available online in India at Rs. 32,000. The new phablet from Sony is now listed at an e-commerce website and will be available starting February 26.

It's worth pointing out that the online retailer, Saholic has only listed the Xperia T2 Ultra single-SIM version, while there is no word on the dual-SIM variant of the device. 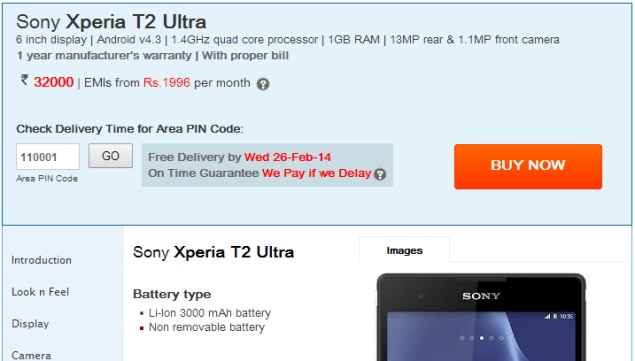 The phablet is powered by a 1.4GHz quad-core Snapdragon (Qualcomm MSM8928) processor with 1GB of RAM. It comes with 8GB of inbuilt storage, which can be further expandable up to 32GB via microSD card.

The phablet sports a 13-megapixel rear camera with Exmor RS for mobile and also houses a 1.1-megapixel front-facing camera with an Exmor R sensor. The rear camera supports various functions like portrait retouch, collage, background defocus, Timeshift burst, and Sweep Panorama. The Xperia T2 Ultra packs a 3000mAh battery with battery STAMINA Mode, which according to the retailer's listing delivers up to 1056 hours of standby time and up to 14 hours of talktime on 2G network.

On Thursday, the Sony Xperia Z1 Compact, the much-awaited international mini-variant of the flagship Xperia Z1 smartphone went official in India at Rs. 36,990.

Sony launched the Xperia Z1 Compact at the CES 2014, alongside Xperia Z1S, which is a full-sized Xperia Z1-variant exclusive to T-Mobile in US.