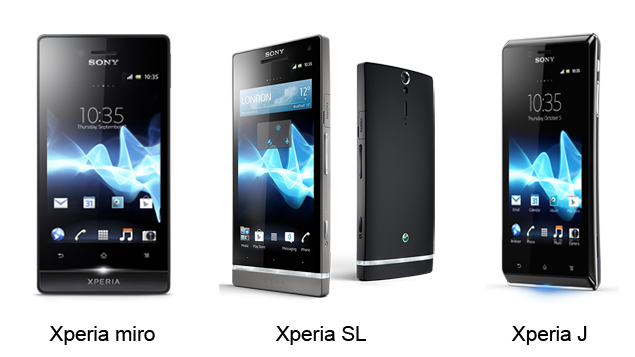 Sony has officially announced the launch of the Xperia miro, Xperia J and Xperia SL smartphones in India. The latest additions to the Xperia series are now available across major retail outlets in the country.

The Xperia miro was announced way back in June along with the Xperia tipo and tipo dual smartphones. More recently the smartphone was available in the country on Flipkart as well as Sony's official website for Rs. 15,249.

The Sony Xperia miro is powered by an 800MHz Snapdragon processor with 512 MB RAM. It has 3GB internal storage expandable up to 32GB via microSD card. It will come in 4 colours: black, gold, pink and silver.

The Xperia SL now officially priced at Rs. 32,549 has been available for a month via various online retailers. This Xperia smartphone features a 4.3-inch scratch resistant TFT display with 1280x720 pixel resolution. It runs on Android 4.0 (upgradable to Jelly Bean) and is powered by a 1.7GHz Qualcomm dual-core processor hosting 1GB RAM.

A successor to the Xperia S, the smartphone offers 32GB internal storage (unto 26GB user accessible) and also features NFC capabilities and FM radio. It is a PLayStation certified device and will allow users to play PlayStation games on the phone with virtual keys. It also features the Sony Entertainment Network, but unfortunately that continues to remain inactive for India users. The phone like many other Sony smartphones, is also DLNA certified.

The Xperia J was released alongside the Xperia V and Xperia T smartphones and recently went up for pre-orders. It is now priced at Rs. 18,399.

The device is 9.2mm thick and has a 4-inch (854 x 480 pixels) capacitive touch screen display with gorilla glass coating atop. It runs on Android 4.0 and is still due for a Jelly Bean upgrade. The device has a 5MP autofocus rear camera with LED flash and a VGA front-facing camera.

On the inside, the device packs in a 1 GHz Qualcomm MSM7227A processor with 512MB RAM, 4GB internal storage and 32GB of expandable memory with microSD. It comes with a 1,750 mAh battery. The connectivity features include Wi-Fi, 3G, Bluetooth, DLNA and A-GPS.