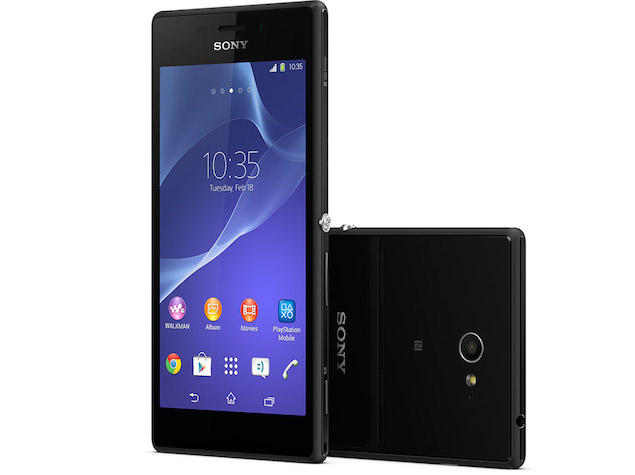 Sony on Monday announced the launch of a new mid-range smartphone, the Xperia M2, at MWC 2014 in Barcelona. The Android 4.3 Jelly Bean-based smartphone, has been billed by the Japanese cellphone maker as 'the slimmest 4G-enabled smartphone in its class' at a rather thick 8.6mm. The price for the Xperia M2 has not been revealed, and it will go on sale globally in April 2014. Sony says it will be priced at under 220 euros MSRP (roughly Rs. 18,800).

The Sony Xperia M2 will also be available in a dual-SIM variant, called Xperia M2 dual, with identical specifications. It features a 4.8-inch qHD (540x960 pixels) display, and is powered by a 1.2GHz quad-core Snapdragon 400 processor (MSM8926 for 4G LTE, MSM8226 for 3G) coupled with an Adreno 305 GPU and 1GB of RAM. The Xperia M2 features 8GB of built-in storage, with microSD card expansion up to 32GB. The 8-megapixel camera on the Xperia M2 has 'auto scene' recognition and HDR. Camera apps such as Social live, Timeshift burst and Picture Effect are other camera features being touted by Sony.

In addition, the Sony Xperia M2 features a 2300mAh battery that is rated to deliver talktime up to 14 hours, standby time up to 693 hours, and is available in three colours - Black, White and Purple. Dual active and dual standby technology is also being touted. Connectivity options include 3G (HSPA+), 4G LTE (in some regions), GPS with A-GPS with GLONASS, Bluetooth 4.0, NFC, Wi-Fi, DLNA, and Micro-USB with tethering.

Sony will also be giving Xperia M2 users access to three movies from Sony Pictures in certain markets. Also included, is the Music Unlimited Service, giving users an access to 25 million songs for free for a period of 30 days, and the Video Unlimited Service will offer instant films. PlayStation Mobile games will also be available for users.

Music enthusiasts can make use of the SBH20 Stereo Bluetooth Headset or the water resistant STH30, headset, which are available additionally. The complete specifications can be found here.

Speaking at the launch was Calum MacDougall, Director of Xperia Marketing at Sony Mobile Communications, who said, "Xperia M2 is an ultra-fast smartphone that offers brilliant specs and performance, reaching new audiences with a mid-range price. This is a great device for the customer looking for a smartphone that has it all. It combines the best of Sony, bringing you our latest technologies complimented with a one of its kind, unique entertainment offer never before seen on a mid-range smartphone."