Sony seems to be planning the launch of a mid-range smartphone, with reports coming in of a handset dubbed Sony Xperia D5103 being spotted at a popular mobile benchmark.

The Xperia D5103 was reportedly spotted on the GFX Benchmark, and not all the purported specifications were detailed. The Xperia D5103 supposedly runs Android 4.4.1 Kitkat OS, which might be upgraded by the time the handset get officially released. The handset will supposedly also feature a HD (720x1280 pixel) display resolution, and run on a 1.4GHz processor (no information on the number of cores), according to Xperia Guide (image below). 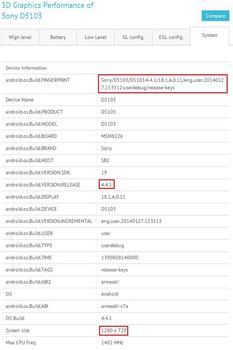 The information on camera features, battery, screen size and design is yet to be revealed. However, the fans would likely to get the information once the handset actually arrives - it is expected to be launched at MWC 2014 starting 24 February.

Sony has sent invites for its official event scheduled for 24 February, where it also is expected to reveal its rumoured Sony Xperia Z2 flagship.

Sony's long-rumoured Xperia Z2 is expected to sport a 20.7-megapixel camera, same as the Xperia Z1. Other rumoured specifications include a quad-core Snapdragon 800 (MSM8974-AB) chipset clocked at 2.3GHz with Adreno 330 GPU; 3GB of RAM; 5.2-inch full-HD display; and a 20.7-megapixel rear camera with a 2.1-megapixel front-facing camera.

The successor to Sony's Xperia tablet Z is also speculated to show up at the event. Since there's no concrete information as to what will be announced at the event, one would have to wait in order to know what the firm has in store for its users.