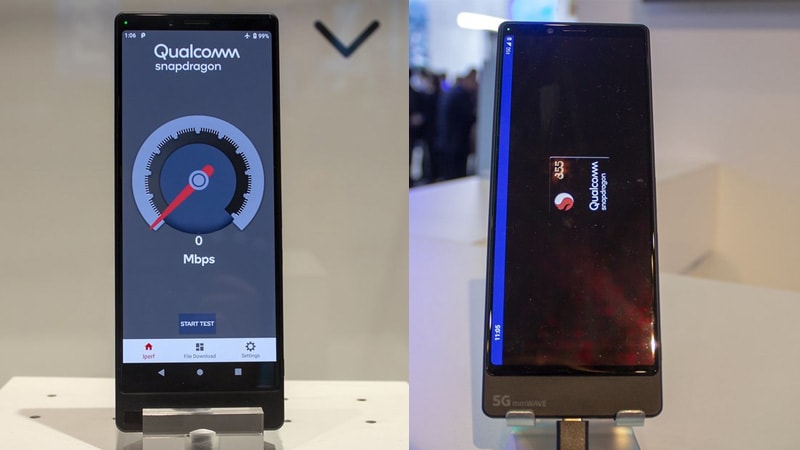 5G and foldable phones were the talk of the town at this year's Mobile World Congress in Barcelona, with nearly every major smartphone manufacturer announcing fancy, futuristic products. Sony had some interesting smartphone launches too but a foldable phone was a no-show and there wasn't much talk about a 5G phone at its keynote either. However, the company did have a 5G prototype Xperia phone on display at its booth, as well as Qualcomm's booth.

The device was reportedly shown off at the booths of both companies at MWC 2019, but it was in a casing so attendees couldn't get their hands on it. From the front, the 5G Xperia looks similar to the Xperia 1, with the same ultra-tall 21:9 CinemaWide display. However, we don't have any other information about the phone regarding specifications or even a name. Given the fact that it was also seen at Qualcomm's booth, it makes logical sense that it's running on the Snapdragon 855 mobile platform, with the X50 5G modem.

Technology website Pocket-lint reports that the phone is currently only known by its internal name ‘AG-1' and isn't a commercial device, as it's only being used for network and experience testing with key customers, as told to them by a Sony representative. The prototype unit was also a 5mm wave product, in addition to supporting the sub-6GHz band. "At the moment, from a rollout point of view, 5G just isn't there. In 4G, you can still [get] more speed in more places than 5G, at the moment," said Adam Marsh from Sony's global communications team.

It's too early to tell when Sony will actually have a commercial 5G product to show off but it doesn't look like they are in any hurry, which makes sense. It will only be until next year or even beyond, before we actually see an exhaustive roll-out of 5G. By then, we're pretty sure Sony will have a device ready for commercial launch.