Sony is hosting an online press conference later today where we could see the launch of the new Xperia phones.

Sony Xperia 1 II is rumoured to be in the works as the company's next-generation flagship model. While the Japanese company is yet to make an official confirmation, images and specifications of the Xperia 1 II have been leaked online. Additionally, details around the Xperia 10 II have also surfaced on the Web. The Xperia 1 II appears to be Sony's first 5G phone. However, the Xperia 10 II in the new series would have 4G LTE. Both new smartphones are likely to be the models that Sony initially planned for the Mobile World Congress (MWC) that was scheduled for February 24 in Barcelona but cancelled earlier this month — due to the Novel Coronavirus outbreak.

Max Weinbach of XDA Developers, has leaked the images and specifications of both the Sony Xperia 1 II and Xperia 10 II.

As per Weinbach's tweet, the Sony Xperia 1 II will sport a 6.5-inch 4K HDR OLED display with 21:9 aspect ratio and Motion Blur Reduction technology. The display panel is claimed to be 90Hz equivalent, though it wouldn't be exactly a 90Hz one. Under the hood, the smartphone appears to have the Qualcomm Snapdragon 865 SoC, paired with 8GB RAM and 256GB of onboard storage. The leaked specifications list shared by the source also shows DualShock 4 direct connection support as well as a Game Enhancer feature designed for mobile gamers.

The Sony Xperia 1 II also appears to have a quad rear camera setup at the back with a 12-megapixel 1/1.7-inch primary sensor with dual phase detection autofocus (dual PDAF) lens and optical image stabilisation (OIS) support. The camera sensor would also include two other 12-megapixel sensors as well as a Time-of-Flight (ToF) sensor along with an autofocus (AF) lens. The rear camera setup would be backed by Zeiss optics and offer features such as real-time Eye AF, up to 20fps AF/ AE tracking burst, and 60 times per second continuous AF/ AE calculation. Similarly, you can expect 3X optical zoom. 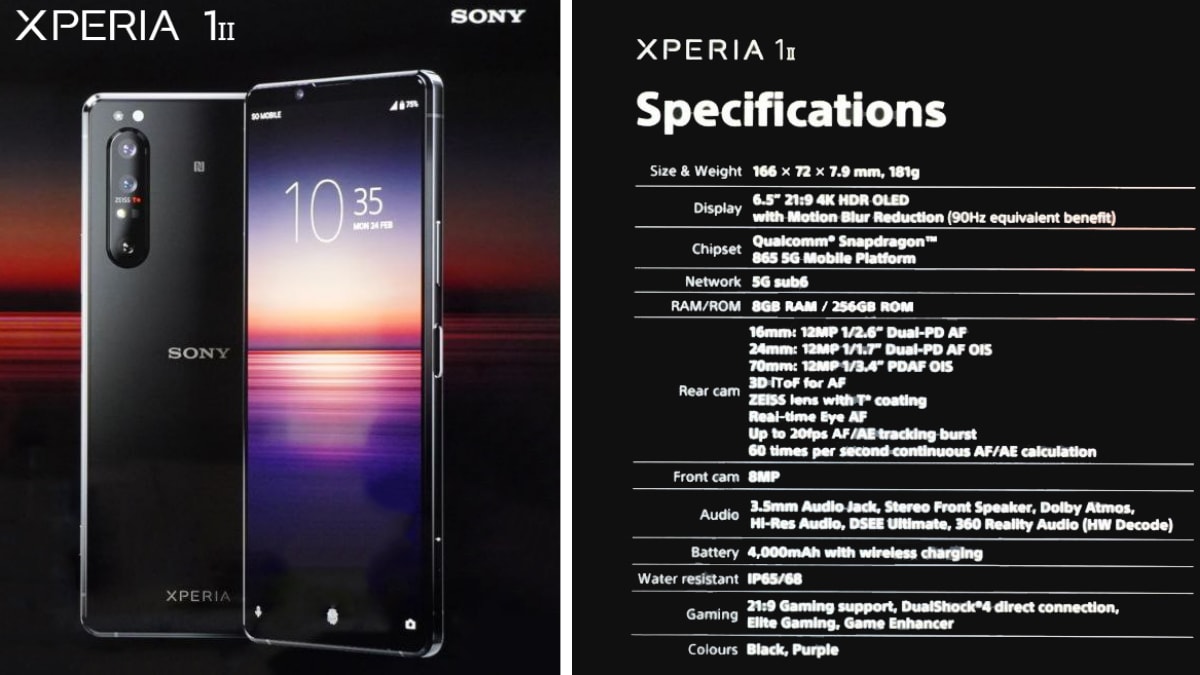 The smartphone would also carry an 8-megapixel selfie camera and include a 3.5mm headphone jack as well as front-firing stereo speakers, Dolby Atmos and Hi-Res Audio, audio integration, and a 360 Reality Audio technology.

Sony also appears to have provided a 4,000mAh battery on the Xperia 1 II along with wireless charging support. Just like previous Xperia flagships, the Xperia 1 II would also feature a water-resistant build and come in at least Black and Purple colour options. Moreover, the images shared by Weinbach shows that the phone would include an in-display fingerprint sensor and NFC support.

To take on the recently launched Samsung Galaxy S20 Ultra, the Sony Xperia 1 II would support 5G on both low- and mid-band network configurations. This, however, also means that you won't get 5G coverage on a millimetre wave (mmWave) network. The smartphone will come as the successor to the Xperia 1 that was launched at MWC 2019 last year.

Unlike the top-notch specifications of the Xperia 1 II, the Sony Xperia 10 II seems to be the company's new mid-range option. The leaked specifications of the smartphone suggest its 6-inch full-HD+ OLED display with 21:9 aspect ratio and Video Image optimisation feature. The phone also appears to have the Qualcomm Snapdragon 665 SoC, along with 4GB of RAM and 128GB of internal storage. Further, it seems to have a triple rear camera setup that would include a 12-megapixel primary sensor with a PDAF lens and an 8-megapixel selfie camera.

Other specifications of the Xperia 10 II may include a 3,600mAh battery, audio jack, and 4G LTE. Further, the phone appears to come with a IP65/68-certified water-resistant build in Black and White colour options.

The launch date of the Sony Xperia 1 II and Xperia 10 II is a mystery. However, if we look at the image showing off the design of the flagship smartphone, it shows the lock screen with the date February 24. This could be a hint that the 5G phone would have debuted at MWC 2020, as reported in the past. But since the MWC is not taking place, we can safely expect the debut of the Xperia 1 II and Xperia 10 II soon.

Furthermore, Sony is hosting an online press conference at 8:30am CET (1pm IST) today where we may see the Xperia 1 II and Xperia 10 II officially.