Sony Tipped to Launch 3 Smartphones, 2 Wearables and a Tablet at IFA 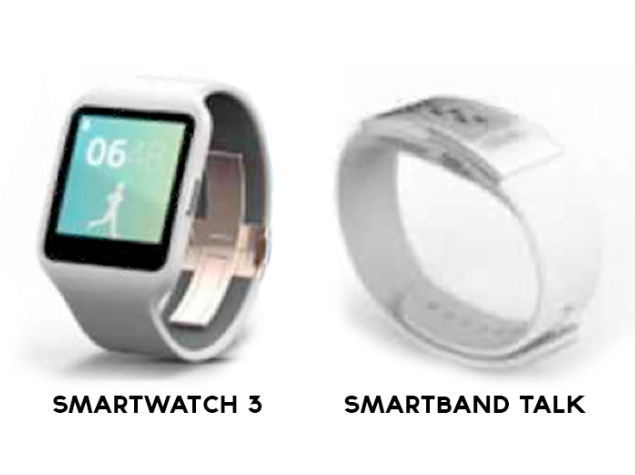 While Sony has already confirmed a September 3 event, the leaks revolving around what's going to be launched at the event don't seem to stop - with the latest tipping SmartWatch 3 and SmartBand Talk wearable devices to be unveiled at the event, alongside more information about the Xperia Z3, Xperia Z3 Compact and Xperia Z3 Tablet Compact also expected at the event.

9to5Google claims to have obtained press renders of two new wearable devices from Sony, the SmartWatch 3 and SmartBand Talk. The website cites sources familiar with Sony's plans to detail the specifications of the these wearable devices. The unannounced Sony SmartWatch 3 is said to run Android Wear, and feature a 1.68-inch 320x320 pixels display and an IP58 rating indicating some amount of water-resistance. The smartwatch is also notes to look very similar to Samsung's Gear 2 Neo.

Additionally, the report claims that Sony will also launch the new fitness tracker and the successor to the Sony SmartBand SWR10 (Review | Pictures) at the event, called the SmartBand Talk. It is said to feature an E-Ink display, as well as Bluetooth connectivity to displays notifications when paired with a smartphone.

9to5Google also suggested that Sony will also be announcing three new smartphones and a waterproof tablet on the event. While 2 of the smartphones are widely anticipated to be launched at the event, the Xperia Z3 and Xperia Z3 Compact, the third smartphone according to the report will be a budget offering dubbed Xperia E3, which could retail between $200 (approximately Rs. 12,000) and $300 (approximately Rs. 18,000).

The unannounced Xperia E3 is tipped to feature a 4.8-inch 720x1280 pixels (HD) display; a 1.2GHz quad-core Qualcomm Snapdragon 400 processor, between 1.5GB to 2GB of RAM, according to the report. Additionally, it will not be a water-resistant device.

The report also details purported specifications of the Xperia Z3 and Xperia Z3 Compact. The alleged flagship Xperia Z3 is said to include a 2.5GHz quad-core Snapdragon 801 processor; 3GB of RAM, as well as a 5.2-inch Triluminos display that according to the report is based on new technology by Sony for increased brightness and a better contrast ratio. It also speculates that the Xperia Z3 will 'feature new software caching enhancements that will keep the device powered for up to 2 days on a single charge.' The smartphone is said to be IP68-certified just like the Sony's latest Xperia M2 Aqua waterproof smartphone. The report also claims it to initially launch as a T-Mobile exclusive.

About the Xperia Z3 Compact, 9to5Google claims it will include a 4.7-inch 720x1280 pixels (HD) display, apart from a 2.5GHz quad-core Snapdragon 801 processor and 3GB of RAM just like the Xperia Z3, along with IP68 certification.