A new round of complaints by iPhone 6 users, who recently along with iPhone 6 Plus users complained of the displays being very prone to scratches, focuses on the allegedly misaligned front-facing camera.

The issue is the latest in a series of alleged hardware flaws that users have been reporting since the release of the iPhone 6 and iPhone 6 Plus in September.

The most famous of these is of course the controversy that was termed 'Bendgate', with users complaining their iPhone 6 and iPhone 6 Plus smartphones were prone to being bent out of shape when placed in pockets for short durations of time.

After being trolled all over the Web by rivals and users, Apple first said a "total of nine customers" in the first six days of sale had complained of the issue, and showed the world the stress tests it subjects the iPhone 6 and iPhone 6 Plus to.

Back to the misaligned front-facing camera issue, now being called 'Crescentgate', a Reddit iPhone 6 user named BAnOpenMindedSkeptic stated (via Phonearena), "My iPhone 6's front facing camera is misaligned. There is a crescent visible on the right side of the hole. This also happened to my friend's phone and a replacement model the Apple Store gave him." Most of the comments on the thread, which already has received 256 upvotes until now, confirm the issue. A user named Shibbbbby also posted some images (seen below) of the iPhone 6 model highlighting the misaligned front-facing camera. 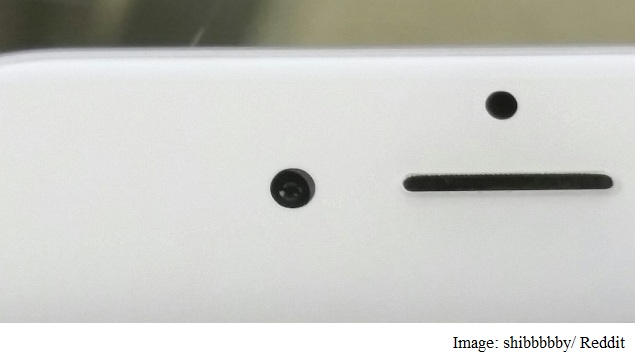 The iPhone 6 Plus seems unaffected by the issue. The Redditor, who also claims to be an Apple employee, says that Apple has not yet identified the issue. Either users will have their iPhone 6 front panel changed or get a new device altogether if they go to Apple Stores for replacement. However, the issue does not seem to affect the images clicked from the front-facing 1.2-megapixel camera.

It is worth noting that last month customers on the Apple Support Communities complained that corners, and even the middle of the iPhone 6 and iPhone 6 Plus' screens can been seen with fine scratches within weeks of use.

While the exact material used in the display of iPhone 6 is not yet confirmed, Apple has been touting the devices' screen with a unique "strengthened Ion-X" glass, which is said to be tougher than regular screen covers. Apple is yet address the issue.