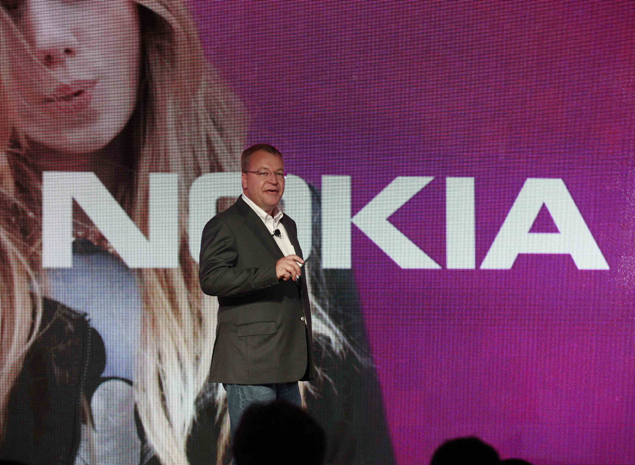 Nokia CEO Stephen Elop recalls a meeting in August 2011 in which the company's leadership struggled to decide on the name of its new smartphone, the first using Windows Phone software.

"We almost fell into the trap that had often befallen Nokia, which was let them work on it a bit longer because we couldn't quite reach agreement," Elop said. Instead, he demanded a decision that day.

"Why wait til tomorrow or next week? We could make the decision today. And we did." Lumia was the result.

Senior Nokia employees say Elop, hired in 2010 to revive the once-undisputed leader in mobile phones, has forced them to make faster decisions, which has sped up everything from restructuring to the development of new handsets.

There is no time to waste. Nokia's ability to compete in the global smartphone market is increasingly questioned; its market share is stands at around three percent, far behind Samsung and Apple which control around 50 percent between them.

Second-quarter Lumia sales missed market estimates, and with cash reserves falling, some investors worry how much time Elop has left to validate his decision to adopt Microsoft's untested Windows Phone software. The transition to Windows, which he said would take two years, is now in its third.

Nokia has picked up the pace of product launches this year, including the July 11 unveiling of its Lumia 1020 with a 41-megapixel camera.

Elop reckoned the company spent 22 months on the N8, which used the now-obsolete Symbian operating system and was launched shortly after he joined the company.

"A number of our Windows Phone products are on six to eight month delivery cycles. We are moving so much faster," he said.

Apple has been launching a new iPhone around once a year, and analysts have said it may need to speed its cycle up to compete with the frequency and variety of Samsung product launches. The South Korean company has close to 40 versions on the market compared with around 20 for Nokia.

Nokia's 1020 is the most advanced of its Lumia smartphones, and followed the Lumia 925 and 928 launches in May. In February, it introduced the more basic Lumia 520 and Lumia 521 models.

Also this year, it announced a 15-euro phone, its cheapest phone ever. It has also upgraded its line of feature phones with the Asha 210 and Asha 310, as well as the more powerful Nokia Asha 501 with built-in social media applications.

Elop said the older Nokia prioritised quality and features but was less disciplined about the time it took to deliver.

It has cut one in three jobs under Elop, and some employees say the leaner structure means things get done faster.

Buzz
Samuli Hanninen, who was in charge of building the imaging software for Lumia 1020 and had returned from its launch event in New York several days earlier, said he was enjoying the same kind of buzz he felt in his early days at Nokia a decade ago.

"We had a culture where we never gave up, we were always working very late, you could call guys at any point of the day to say this needs to be fixed," he said. "We somehow lost it. The process became more important than the product and consumer."

Elop, a Canadian and former Microsoft executive, replaced Olli Pekka Kallasvuo, who led the company from 2006 and was criticised for being complacent about the rise of smartphones.

Elop was the first non-Finn to become CEO of the 148-year-old company, which started as a paper mill and at one point made rubber boots. Many initially wondered whether he could fit in.

His enthusiasm quickly endeared him to staff. In person, he is quick to laugh and to offer jokes, with a down-to-earth style that has little in common with the Microsoft's Steve Ballmer or Apple's former CEO Steve Jobs.

He can also be blunt. In a now-famous 2011 email to staff, he compared Symbian to a "burning platform" that needed to be abandoned. The switch to Windows was a shock, but many said Elop won support with his frankness.

Carolina Milanesi, an analyst at Gartner who has followed the industry for over a decade, said the switch was the right choice and one that could only have been made by an outsider.

"You needed someone who wasn't personally invested, who could take a harsher look," she said. "If you'd been there, you'd obviously have been part of what the problem was."

Don't be arrogant
The problem, Elop says, was a stubbornness that came from years of being at the top. He says he has encouraged employees to adopt a "challenger mindset".

"What I really mean is, don't be arrogant," he said. "There's a number of examples over the last six, seven years, where Nokia heard trends but decided to ignore those trends because it felt that it somehow knew better. And that hurt the company badly for many years."

Alf Noto, head of Nokia's customer care division, said that approach was reflected in the way it now deals with customers. Elop answers around 10-20 customer emails each day, he said.

Others say Nokia has also become more humble towards its partners, including carriers and retailers who sell handsets, as well as developers who create the apps for phones.

"He took a lot of the arrogance out. For a while we were behaving like a market leader and we weren't," said Christof Hellmis, an executive at Nokia's Here navigation business.

Elop, however, has yet to prove he was right to switch to Windows, with Google's Android and Apple's iOS running around 90 percent of smartphones sold today.

He was speaking to Reuters the day before it announced it sold 7.4 million Lumia phones in the second quarter, a 32 percent improvement from the first quarter but fewer than the market's consensus forecast of 8.1 million units.

It chose not to predict future Lumia sales and some, including Pierre Ferragu at Bernstein Research, are sceptical about Nokia's ability to compete in smartphones.

Nokia shares, now around 3 euros, are a fraction of their 2000 peak of 65 euros, and its bonds have junk ratings.

Chris Weber, executive vice president in charge of global sales and marketing, said its expanded product line, as well as a joint marketing push with Microsoft and AT&T for the Lumia 1020, should help boost sales ahead.

"They're now behaving the way they should, fighting and thinking differently," she said. "Things don't change overnight. But I think the 1020 is going to be the spark to get customers to pay attention to Nokia."