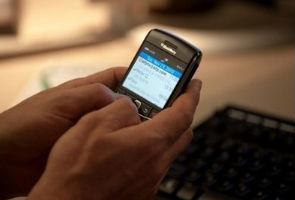 Declining market share, shrinking revenue, profit warnings and delays in replacing the aging handsets have triggered investor anger at the two co-CEOs Jim Balsillie and Mike Lazaridis who control management as well as board at the BlackBerry maker Research In Motion (RIM).

Calls for making board independent of management have grown shriller as RIM stock has sunk more than 50 percent this year - hovering at about $27 now.

Admitting that RIM faced 'some challenges,' the co-CEOs managed to control investor anger Tuesday, with Lazaridis announcing that seven new BlackBerry smart phones running a new operating system will be unveiled in the coming months.

The release of the seven smart phones, including the new BlackBerry Bold, will again catapult the wireless giant into the lead role, he said.

"It (the new Bold) may have delayed us, but we are going to come out ahead,'' said Lazaridis who started RIM in the 1980s. Warming the hearts of investors, Jim Balsillie added, "Mike and I, along
with the executive team, are closely managing this transition and have positioned the company for continued future success.''

The new line-up of BlackBerry smart phones will be run by RIM's powerful new operating system used in its PlayBook tablet.

Responding to the prevailing rumours of RIM's takeover by Apple or Microsoft, Balsillie said a rights plan would be put in place in the "blink of an eye'' if a hostile takeover bid was mounted against the company.

Assuring investors, he said, "If there is anything that will make you sleep better at night that I can do, I will do it." There have been rumours that cash-rich Apple or Microsoft could buy out RIM whose net worth is now just $14 billion.

BlackBerry has sunk from top to the third place in the US smart phone since October under onslaught from Apple's iPhone and Google Android devices.
Comments

Mobile phone prices may go up in Tamil Nadu
90,000 email addresses hacked from US military contractor