In some latest news from the Samsung stable at CES in Las Vegas, the company showed off its flexible display technology that it calls Youm at its closing keynote. The bendable OLED lineup uses thin plastic instead of glass, thereby making it unbreakable.

The new screen technology was demoed as a future concept by Stephen Woo, President of Samsung, who was joined by Brian Berkeley, Senior Vice President of Samsung Display. The curvaceous prototype featured a wrap-around screen that took the display and the content on it, around the edges of the device.

Th company also played out a concept video which showed a phone that unfolds to transform into a tablet.

It was interesting to see Microsoft jumping in with Eric Rudder, the company's Chief Technical Strategy officer demonstrating a prototype of a Windows Phone with the Youm display. Images posted by CNET reveal the bendable prototype with a Windows live tile interface. Not just that, Rudder also seemed to mock Apple by saying, "Some companies talk about reality distortion fields -- we built one". 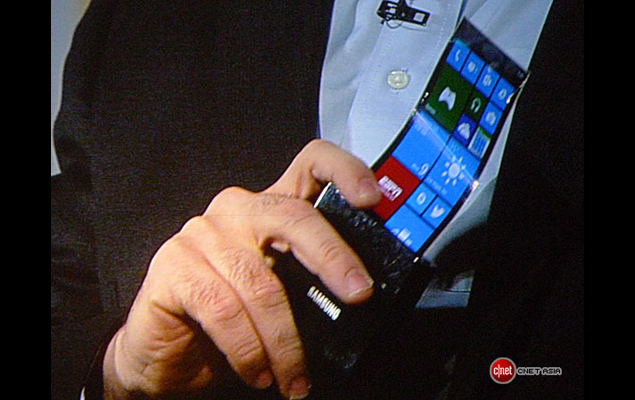 It's unlikely for the Youm tech to reach the masses soon, but it's interesting to know that the company is thinking about implementing it in the future. We'll make sure to update you with all the details as and when they're available.

Furthermore, Samsung also announced that it's developing a 10.1-inch LCD panel that will use 25 percent less of the energy in the current iteration without compromising on the resolution.

Samsung had showcased two prototypes with flexible displays at CES 2011 as well. One was a paper-thin 4.5-inch screen with a WVGA (800x480 pixel) resolution that bends like an arc. The other was a transparent qFHD (quad full high definition) AMOLED display that Samsung claimed to be working on for TVs and monitors.

The Korean electronics giant has had its fair share of attention at the event with quite a few products across various categories. These include curved OLED TVs, Series 7 notebooks,the F9500 OLED TV, Bluetooth soundbar and NFC-enabled speakers, full-HD Windows 8 touchscreen monitor, the NX300 camera, gesture control TVs and its new Exynos 5 Octa Soc with eight cores.