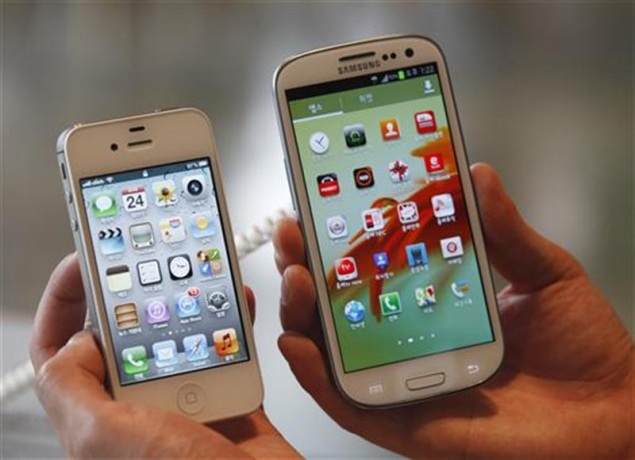 A judge mulling whether to trim or overturn Apple's billion-dollar damages award against Samsung on Thursday called for a ceasefire in the ongoing patent war between the smartphone titans.

"I think it's time for global peace," US District Court Judge Lucy Koh said after legal teams from Apple and Samsung dueled for hours over post-verdict motions in her courtroom in the Silicon Valley city of San Jose.

"Let me hear if there is anything the court can do," she continued. "It would be good for consumers; good for the industry and good for the parties."

Samsung attorney Charles Verhoeven responded to the challenge by saying the South Korean consumer electronics firm was willing to negotiate a settlement with Apple but "the ball is in their court."

Apple attorney Harold McElhinny expressed no interest in working out a settlement, opting instead to urge Koh to back legal "remedies" daunting enough to dissuade a powerhouse like Samsung from ever copying an Apple gadget.

"It is the power of this court to establish a line and enforce it," McElhinny argued. "If you didn't see the same case that the jury saw, I am not sure how we get to resolution."

Verhoeven told Koh that Apple was engaging in "thermo-nuclear war" and choosing the court instead of the market as the battle ground.

Koh massaged her temples at times as she grilled rival attorneys for more than four hours regarding nuances of law and evidence underlying the slew of motions filed after the $1.049 billion jury verdict three months earlier.

At times, she challenged Apple to convince her why the damages award for patent infringement wasn't excessive.

How legal and sound the jury's calculations were, and whether the massive award should be reduced or even whether a new trial should be held just to recalculate damages, were among the matters tackled by Koh.

"I have quite a number of questions, because there are so many issues and they are quite complex," Koh told the rival legal teams.

"I am planning to issue orders in installments, organized by subject matter," she added, explaining that her decisions on motions would be doled out in the weeks or months ahead.

"I don't see how you can look at the aggregate verdict without looking at the pieces put together to make that verdict," Koh replied after Apple attorneys urged her not to try to figure out the jury's reasoning, device by device.

"If there is a basis to uphold the damages award, by the record, then I am going to uphold it," she continued. "But I think it is appropriate to do analysis by product."

Apple attorneys protested that Koh was trying to dig into the jury's thought process, while Samsung countered that it was proper for the judge to "reverse engineer" the damages award.

Motions addressed included Samsung's request to have the verdict overturned on the grounds that a juror's own legal dispute wrongly led to the South Korean firm being hit with a billion-dollar patent damages award.

Samsung wanted the verdict tossed out based on the jury foreman's undisclosed legal skirmish with Seagate nearly 20 years ago.

The foreman had worked for Seagate, a technology company in which Samsung owns a small stake, and wound up declaring bankruptcy after a court battle with his former employer.

Samsung tried to convince Koh that the juror's experience influenced the August verdict, in what amounted to misconduct strong enough to have the outcome overturned.

"He was deliberately dishonest," argued Samsung attorney John Quinn. "He should have been excused."

Apple argued that it was ludicrous to believe the man held a grudge for 19 years and then made it his purpose in life to get onto the jury to exact revenge.

Koh is also considering a motion by Apple for an injunction banning US sales of eight Samsung smartphone models said to contain patented technology at issue in the trial.

Apple also wants the award tripled on the grounds the patent infringement was "willful."

The damages the jury ordered Samsung to pay to Apple for illegally copying iPhone and iPad features made it one of the biggest patent cases in decades.

Jurors decided the case with over 700 separate claims in less than three days of deliberations.

Samsung had steadfastly denied the charges by Apple, claiming it developed its devices independently. It unsuccessfully argued that Apple infringed on its wireless patents.