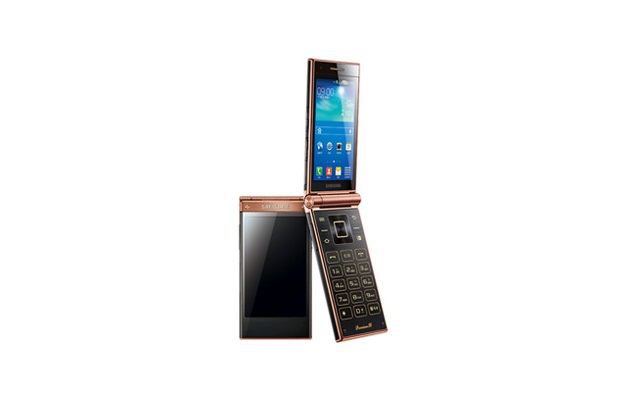 It seems Samsung is on a launching spree when it comes to flip phones. The South Korean major has unveiled its third Android flip phone this year, the W2014. The Samsung W2014 flip phone has been launched in partnership with China Telecom. However, the company has not revealed the pricing and availability details of the device, yet.

The Samsung W2014 flip phone has a similar build to other Samsung flip phones, the W789 and the Galaxy Golden launched earlier this year. Although, the major difference among the three is that the Samsung W2014 is powered by a quad-core 2.3GHz Snapdragon 800 processor along with 2GB of RAM, which makes it the fastest flip phone launched by Samsung, yet.

Other specifications of the Samsung W2014 include two 3.7-inch Super AMOLED touschscreen displays (on the inside and the outside) with a resolution of 480x800 pixels, a 13-megapixel rear camera, 2-megapixel front-facing camera, dual-SIM support, 32GB inbuilt storage with additional 64GB expandable storage support and 1900mAh removable battery. The Samsung W2014 runs Android 4.3 Jelly Bean out-of-the-box and weighs 173.5 grams.

Samsung launched the Galaxy Golden and W789 flip phones in August this year. The Samsung Galaxy Golden sports two 3.7-inch Super AMOLED displays, on the inside and the outside. The phone is powered by a 1.7GHz dual-core processor with 2GB of RAM and runs on Android 4.2 Jelly Bean. The phone also includes FM Radio and will come in Champagne Gold colour. Connectivity options include Wi-Fi, GPS and Bluetooth. It comes with a 8-megapixel camera. The onboard storage and other specifications of the phone are not clear at this stage.

On the other hand, Samsung W789 features two 3.3-inch HVGA displays with 320x480 pixel resolution and boasts dual-screen setup. It is powered by a 1.2GHz quad-core processor. It runs on Android 4.1 Jelly Bean. The device supports dual SIM (CDMA+GSM) with dual-standby. Connectivity features include Bluetooth, Wi-Fi, Micro-USB and GPS. It also packs a 5-megapixel rear camera with flash.