Samsung vies for spotlight ahead of iPhone launch 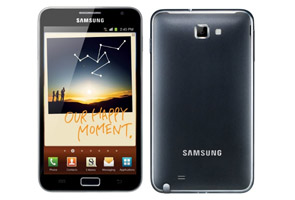 Samsung Electronics Co., the world's largest mobile-phone maker, said Friday it plans to show a new mobile device in late August, trying to stay in the consumer spotlight ahead of Apple's expected release of the latest iPhone in September.

The move comes as Samsung is ensnared in a closely-watched courtroom fight with Apple Inc. over smartphone and tablet patents. Each side is seeking billions of dollars in compensation or royalty payments.

The South Korean company said the new device will be unveiled Aug. 29 in Berlin, two days before Europe's biggest consumer electronics show, IFA. The company declined to give more details.

But analysts said it is likely an update of the Galaxy Note, which has a screen bigger than smartphones but smaller than tablet computers and can be used with a stylus pen.

"It is time for the new Galaxy Note," said Kim Young-chan, an analyst at Shinhan Investment. "Samsung's strategy is to roll out a new product before Apple does, so there will be a new smartphone before the new iPhone."

Analysts expect the new iPhone to arrive in September or October and go on worldwide sale during the fourth quarter.

Releasing another mobile product will help Samsung fend off competition from Apple during the fourth quarter. Analysts believe sales of Galaxy S3 smartphones, released in Europe in May and in the U.S. in June, will hit a peak before Apple introduces a new iPhone.

The Galaxy Note has a 5.3-inch display that is about twice as large as the iPhone's 3.5-inch screen diagonally. The Note received mixed reviews when it made a debut last year but it took off, becoming one of Samsung's top-selling high-end smartphones along with the Galaxy S.

Samsung sold 7 million of the first generation of Galaxy Note between October and May.

The product launches in the fall will be Samsung and Apple's first following the trial. The U.S. district court in San Jose said the patent trial between Samsung and Apple will last about four weeks from July 30.
Comments