Share on Facebook Tweet Snapchat Share Reddit Email Comment
A recent report by technology market research firm Counterpoint made headlines when it claimed that Micromax had overtaken Samsung as the biggest mobile phone vendor in India. Counterpoint said that Micromax had16.6 percent marketshare in Q2 2014, while Samsung's share shrunk to just 14.4 percent. Now, IDC is refuting that claim with its latest quarterly report.

IDC claims that Samsung is still very much the leader in the mobile phone segment in India, with around 17 percent marketshare. Micromax is second at 14 percent, while Nokia is third at 10 percent.

"While Samsung has held on to its leadership position in the market, it is noteworthy that Micromax is growing faster," said Jaideep Mehta, Vice President and General Manager - South Asia, IDC. "Samsung needs to continue to address the low-end of the market aggressively, and also needs a blockbuster product at the high end to regain momentum. Given the current growth rates, there is a real possibility of seeing vendor positions change in the remaining quarters this year." 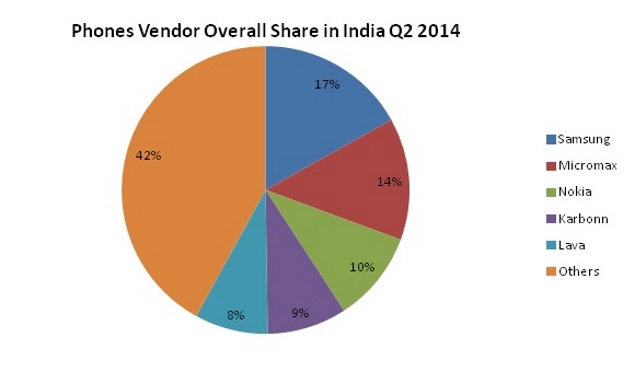 According to IDC, the overall India mobile phone market stood at 63.21 million units in Q2 2014, a 5 percent increase over Q1 2014. The quarter-over-quarter growth can be attributed to both product categories (i.e. smartphones and feature phones), the research firm said.

The IDC report said that smartphone market in India maintained its growth impetus with smartphone shipments achieving year-on-year growth of 84 percent in Q2 2014 and a quarter-over-quarter growth of 11 percent. Vendors shipped a total of 18.42 million Smartphones in Q2 2014 compared to 10.02 million in the same period of 2013. 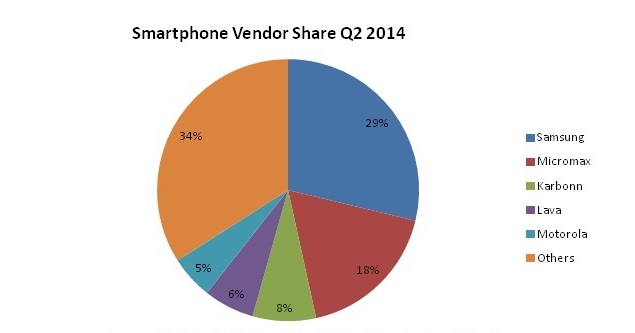 While Samsung and Micromax took the top honours in the smartphone segment, Karbonn maintained its third position. However the gap between Micromax and Karbonn has widened significantly, IDC added. According to the research firm, Lava could take the third spot in the coming quarters as it is within "striking distance" of Karbonn.

Motorola clinched the fifth spot, despite being available only through Flipkart, crossing 1 million sales within 5 months of launch.

IDC also believes the introduction of Android One and low-cost Mozilla-powered devices could alter the landscape of the Indian smartphone market significantly.

"The smartphone market is expected to more than double between now and 2018 and much of this is expected to be driven by the migration from feature phones to smartphones," said Kiran Kumar Research Manager, Client Devices, IDC India. "The user expectations are simple - a best-in-class user experience at affordable prices. With the introduction of Mozilla and Android One, the sub-$200 segment is anticipated to become even more appealing."