The overall global smartphone market grew 28.6 percent from a year ago with 218.8 million units sold, according to the IDC survey. That was down 2.8 percent from the fourth quarter, with a seasonal impact on sales.

Samsung had a 30.2 percent market share, compared with 31.9 percent a year earlier.

Apple remained the number two global vendor at 15.5 percent, which was down from 17.1 percent one year earlier. 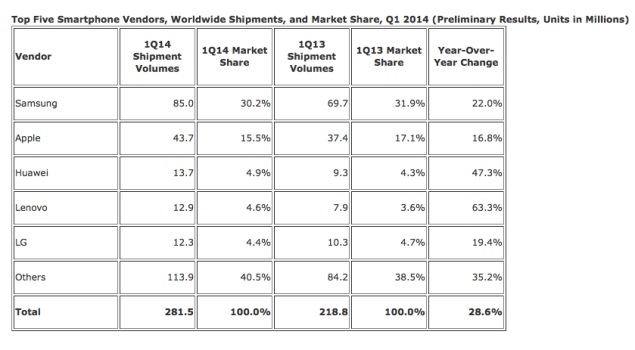 This suggests "another record-breaking quarter at the end of the year," he added.

"The face of the smartphone market is changing rapidly to reflect the rise of its largest market, China, where a record 40 percent of the smartphones shipped worldwide in the first quarter were bound to Chinese consumers," said Chau.

"In a quarter where global shipments declined sequentially, China bucked the trend. The market benefited from its seasonal Lunar New Year uptick, greater emphasis on 4G devices and the official launch of Apple at China Mobile resulted in volumes a third higher than fourth quarter levels."

The latest survey did not break down sales by operating system, but suggests that the Google Android system remains dominant, after grabbing roughly 80 percent of sales in late 2013.

Apple and Samsung are locked in a legal battle in the United States and elsewhere, with the US giant accusing its rival of infringing on patents.

Google Nexus 6 to be based on LG G3, feature fingerprint sensor: Report
Jurors fail to reach verdict in Apple-Samsung patent case on Wednesday