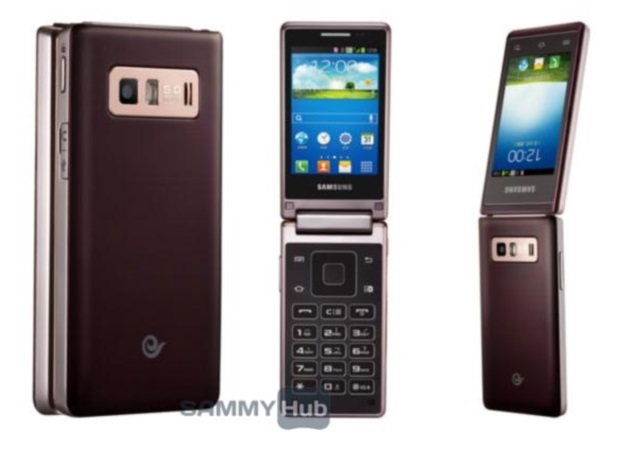 Samsung's new SCH-W789 Hennessy Android flip phone, has been making headlines, thanks to a series of online leaks.

Now a number of new images have surfaced online that reveal the design of the alleged China-bound Hennessy flip phone. Sammy Hub has posted images of the alleged Samsung SCH-W789 Hennessy phone, claiming that the upcoming flip phone is bound for China. The site also claims that China Telecom will launch the phone, soon and that it supports both CDMA and GSM networks.

The site has also listed some of the specifications of the alleged Hennessy flip phone, including a 1.2GHz quad-core processor with 1GB of RAM, and a 5-megapixel rear camera accompanied by flash. The device is likely to support microSD cards. The device is expected to feature a 3.3-inch HVGA display. The Samsung SCH-W789 Hennessy flip phone is likely to run Android 4.1 Jelly Bean. Samsung is also expected to offer a Luxury Gold colour variant of the phone.

The image of the front panel of the phone features the display along with three capacitive keys beneath the screen. The left panel houses the volume rocker keys while the right side features the power key and the 3.5mm audio jack port and possibly, a charging slot. The back panel features the 5-megapixel rear camera along with an LED flash. The images also show that the device boasts dual screens.

The Samsung SCH-W789 Hennessy is not the only Samsung flip phone that is in the works, as the company is also rumoured to be working on a Galaxy Folder flip phone.

The rumoured specifications of the Samsung Galaxy Folder include a 3.7-inch AMOLED display with a resolution of 480x800 pixels. It is said to be powered by a 1.7GHz Snapdragon 400 processor coupled with 2GB of RAM. It is likely to run Android 4.2.2 Jelly Bean and include an 1820mAh battery. There are reports that suggest that the Galaxy Folder will support LTE. The device has also been spotted in a few images revealing a dual-screen setup much like the Samsung SCH-W789 Hennessy flip phone.

However, there is no word on when both of these flip phones will be launched and on the pricing of the phones.