From a foldable smartphone to one with 30x optical zoom, we have a lot to unpack here. 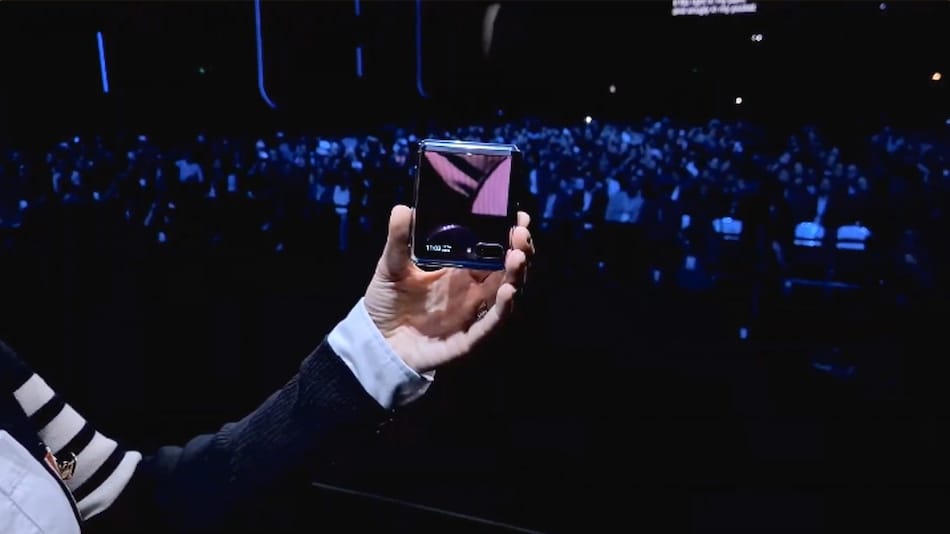 Galaxy Unpacked 2020, Samsung's first major launch event of 2020, has begun. The company began this event with the launch of the Galaxy Z Flip, which is a foldable clamshell smartphone that reminds us a bit of Motorola Razr 2019. Samsung S20 price in India could be revealed at the Galaxy Unpacked 2020 event. Samsung Galaxy S20, Galaxy S20+, and Galaxy S20 Ultra have been launched at the event. Samsung also launched the Galaxy Buds+ truly wireless in-ear headphones.

The Samsung Galaxy Z Flip was introduced in an ad during the 92nd Academy Awards. It's a clamshell foldable smartphone with a hole punch selfie camera, and a secondary display on the cover. Samsung says the smartphone has a 6.7-inch screen when it is unfolded. There's a Flex Mode, for you to use the bottom half of the screen for additional functions when the phone is half-opened. For instance, the bottom half of the screen could be used to comment on YouTube or access photo editing functions, when the top half has the video or photo that you're watching. Samsung spent a lot of time talking up the engineering prowess needed to create this kind of a device. This smartphone is expected to ship with the Snapdragon 855+ SoC with 8GB RAM and 256GB storage.

Samsung Galaxy Z Flip price is $1380, which is roughly Rs. 98,000, and it will be available from February 14. The company also unveiled a special Thom Browne edition of the Galaxy Z Flip, which is a limited edition of this phone. More details about this edition will be revealed later this week.

Samsung Galaxy S20 Ultra has a 108-megapixel primary camera, apart from three other cameras including a wide-angle and a telephoto lens. This device supports 5G and be powered by the Qualcomm Snapdragon 865 SoC or Exynos 990 SoC depending on the market. The Galaxy S20 Ultra is ships with a single 40-megapixel selfie camera, housed in the 6.9-inch QHD+ display. You can get up to 16GB RAM, and up to 512GB storage on this device. This smartphone ships with a 5,000mAh battery, and supports up to 45W fast charging via an optional adapter. This phone has a nona-binning technology that captures nine pixels in one for better images. The Samsung Galaxy S20 Ultra supports 30x hybrid optical zoom, which is quite impressive for a smartphone. The smartphone also supports up to 100x digital zoom. These Galaxy S20 Ultra has a display with a 120Hz refresh rate, but you can only use it in full-HD+ resolution, and not at QHD+.

The Samsung Galaxy S20 and the Galaxy S20+ share a fair few specifications, with the display size, battery capacity, and the number of rear cameras being one of the few differences. The Galaxy S20 features a 6.2-inch QHD+ display along with a triple rear camera setup with a 12-megapixel wide-angle camera, a 12-megapixel ultra-wide angle camera, and a 64-megapixel telephoto camera. The S20+ has a ToF camera apart from the three cameras also seen on the S20. Both the S20 and the S20+ are powered either by the Qualcomm Snapdragon 865 SoC or the Exynos 990 SoC, depending on the market. Both smartphones feature a 10-megapixel hole punch selfie camera. On the software front, the Samsung S20 and the S20+ run OneUI 2.0 based on Android 10. Both smartphones can capture videos in 8K with no time limit. The phones have a better Super Steady mode for better video stabilisation. Samsung Galaxy S20 has a 4,000mAh battery while the S20+ has a 4,500mAh battery. These smartphones support expandable storage via a microSD card. These two Galaxy S20 series phones have a display with a 120Hz refresh rate, but you can only use it in full-HD+ resolution, and not at QHD+.

Samsung also announced some other things at the Galaxy Unpacked 2020 event. It announced that it now has a partnership with Netflix, with some exclusive behind the scenes content for S20 series owners. Galaxy Z Flip buyers will get a YouTube Premium subscription for free for a limited time. Galaxy S20 and Galaxy Z Flip owners will get better integration with Google Duo for an improved video calling experience. The Galaxy S20 will be one of the first devices to support Live Captions on Android, for realtime subtitles. Forza Street, Microsoft's racing game, is coming to S20 series smartphones. Microsoft and Samsung are working on "creating a premium cloud-based game streaming experience", but more details will be revealed later this year.