Samsung Galaxy S20 FE is likely to launch on September 23 at a virtual event called “Galaxy Unpacked for Every Fan”.

Samsung Galaxy S20 FE 5G has been briefly spotted on the company's website in Germany. A support page for the smartphone that is now removed revealed the name and an image of the phone. The phone also surfaced on US telecom operator Verizon's website that has further shared the specifications of the phone. Same as Samsung Germany listing, the Verizon listing has also now disappeared, but can still be spotted via Google cache. The handset has already been spotted on the Samsung official site in Philippines.

The Samsung Galaxy S20 FE 5G has been spotted on the South Korean company's German website. The page that is now removed was first spotted by WinFuture's Roland Quandt and accessed by by CNET. The webpage showed the smartphone from the front, and confirmed the name of the handset. The phone bears the model number SM-G7818/DS and features a hole-punch display with the cutout in the centre like we have already seen in various Samsung flagship smartphones.

The Samsung Galaxy S20 FE 5G phone was also spotted on the Samsung Philippines site in Cloud Navy and Cloud Lavendar colour options 128GB of storage. It was later seen on TENAA as well as NBTC suggesting the phone features a 6.5-inch display, 4,500mAh battery with 15W wired charging support and a 4G variant.

As per the renders of the handset, the smartphone has a flat display and a triple camera setup at the back.

In another Samsung Galaxy S20 FE-related development, Quandt also spotted the phone on Verizon's website. The phone listing has now been removed but is still visible via cache.

As per the cached information, the Samsung Galaxy S20 FE will sport a 6.5-inch full-HD+ Super AMOLED display and feature a 4,500mAh battery. It shows the phone with water and dust resistance certification. The listing also shows the presence of 32-megapixel front shooter, Snapdragon 865 SoC, and Android 10 in the phone. 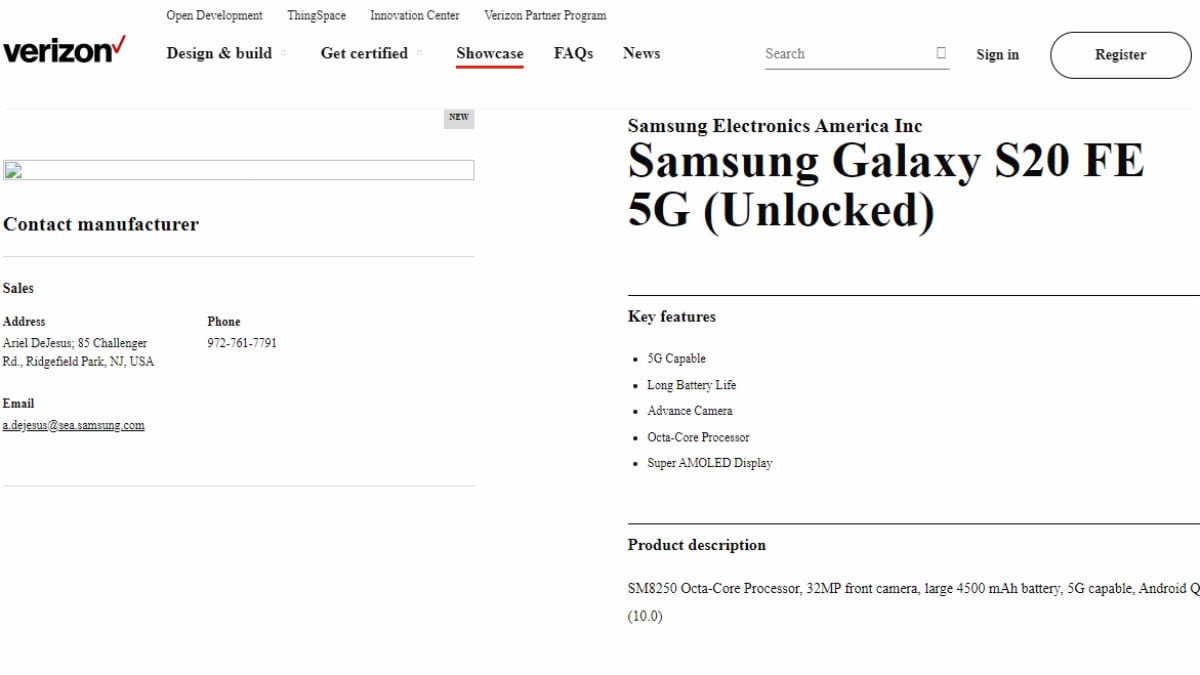 Samsung Galaxy S20 FE is likely to launch on September 23

Past reports have suggested that the handset will come with an in-display fingerprint scanner and 6GB of RAM. It is also claimed that the phone will pack a triple camera setup with two 12-megapixel sensors and an 8-megapixel snapper.

Samsung Galaxy S20 FE is likely to launch on September 23 at a virtual event called “Galaxy Unpacked for Every Fan”.

Further reading: Samsung, Samsung Galaxy S20 FE, Samsung Galaxy S20 FE specifications
Sourabh Kulesh Email SourabhK
Sourabh Kulesh is a Chief Sub Editor at Gadgets 360. He has worked in a national daily newspaper, a news agency, a magazine and now writing technology news online. He has knowledge on a wide gamut of topics related to cybersecurity, enterprise and consumer technology. Write to sourabhk@ndtv.com or get in touch on Twitter through his handle @KuleshSourabh. More
Call of Duty: Warzone Might Be Coming to Mobile, Activision Job Listing Suggests
Paytm Is Back After App Was Removed From Google Play Store, Paytm First Games Pulled Alongside