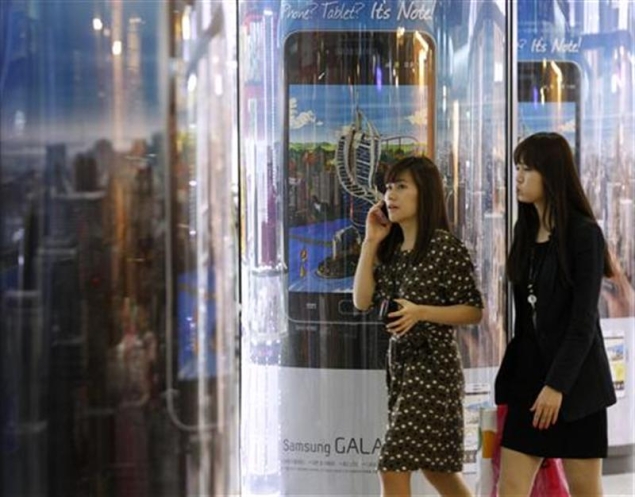 Most analysts, however, expect a run of four straight record quarters to end in December as the South Korean group, the world's leading maker of smartphones, TVs and memory chips, ramps up its marketing to counter Apple's new iPhone and other products in a crowded $200 billion global smartphone market.

Samsung may have spent around $2.7 billion on marketing in July-September alone around the London Olympic Games and new Galaxy promotions, Credit Suisse has estimated.

This year's expected record profit of 28 trillion won will also trigger higher performance related payouts to many of Samsung's 206,000 staff early next year. And Samsung may have to set money aside this quarter if it fails in an appeal to overturn an August 24 U.S. court verdict that awarded more than $1 billion in damages to Apple for patent infringements by Samsung.

"Fourth-quarter profit will be pressured by one-off expenses: performance payouts and some $1 billion in legal provisioning relating to the Apple litigation. Excluding those, core earnings will remain solid and a swing factor is how much Samsung spends on marketing," said Lee Sun-tae, analyst at NH Investment & Securities.

Analysts expect earnings to decline until the second quarter of next year as a slump in computer sales and a weak global economy sap demand for chips and electronics products.

Smartphone heavy?
"The biggest risk for Samsung is competitive product line-ups from its rivals such as the iPhone 5. Because handsets drive most of its profits, one misstep in handsets could result in losses for the whole Samsung group," said Byun Han-joon, an analyst at KB Investment & Securities.

Profit at Samsung's mobile division is likely to have more than doubled in July-September to around 5 trillion won around two thirds of total group profit as smartphone shipments topped 58 million, including up to 20 million Galaxy S IIIs.

Ahead of full quarterly results due by October 26, Samsung estimated its July-September operating profit jumped 91 percent to 8.1 trillion won from a year ago, beating an average forecast of 7.6 trillion won in a Reuters survey of 16 analysts. That would be more than a fifth higher than the previous record in April-June. The company, valued at around $197 billion, estimated its third-quarter revenue at 52 trillion won, in line with forecasts.

Samsung shares fell 0.5 percent to 1.36 million won on Friday. The stock has risen more than 7 percent since the U.S. patent defeat in August. Apple shares have gained less than 1 percent.

Cheap as chips
Strong handset sales made up for reduced profits from its chip business, as prices of its mainstay dynamic random access memory (DRAM) chips, used in computers and mobiles, dropped 14 percent in the September quarter. DRAM chips now trade below what it costs most contract manufacturers to make them, and will squeeze near-term earnings, analysts say. Tablets and smartphones, the real growth areas, use far smaller memory storage.

Samsung is expected to invest less in chips next year due to the drop in demand, which could be bad news for semiconductor equipment manufacturers such as ASML. Kwon Oh-hyun, promoted to Samsung CEO in June, said late last month that the group has yet to finalise its 2013 investment plans.

Samsung is beefing up its product line-up, with the latest phone-cum-tablet Galaxy Note expected to go on sale in the United States this month, and its ATIV smartphones that run on Microsoft's new Windows system to compete with Nokia's Lumia series.

Taking note
Samsung's mobile division chief JK Shin last week predicted Note II sales could be three times higher than those of its predecessor model in the three months after launch suggesting sales of around 10 million devices by the end of this year.

Some analysts see the Note II, a stripped-out, cheaper version of the Galaxy S III and rising NAND flash memory chip prices helping Samsung deliver higher fourth-quarter profit. Nomura on Friday predicted October-December profit could be up to 10 percent more than the 8.1 trillion won in July-September.

In a note on Friday, Citi analyst Henry Kim predicted strong October-December profits, driven by a recovery in semiconductors, though telecoms operating margins could decline by 5 percentage points to 15 percent as it spends more on marketing. "The semiconductor division will show the strongest momentum," he said.

Despite a bruising series of patent disputes and the reputational risk of the U.S. court defeat in August, Samsung's brand value has surged this year as it shipped more handsets and smartphones than any of its rivals. The value of the Samsung brand has jumped to 9th in the world up from 17th last year at $32.9 billion, according to brand consultancy Interbrand. That's more than Toyota Motor, but less than half of second-ranked Apple's $76.6 billion.