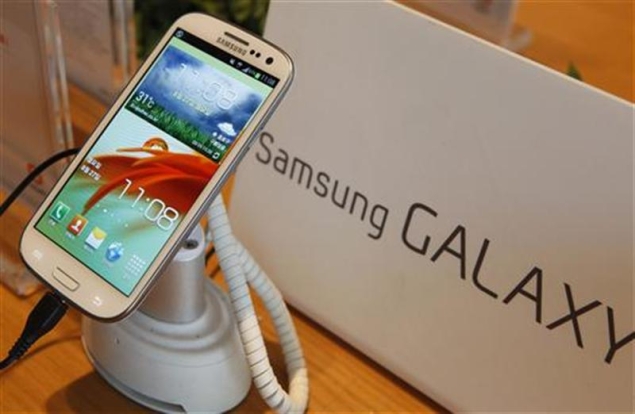 Samsung Electronics Co. said quarterly profit soared 76 percent, boosted by the popularity of its Galaxy smartphones, which outsold the iPhone for a fourth straight quarter.

But the company said Friday it expects earnings to decline during the current quarter because of seasonally low demand for consumer electronics. It is also leaving its 2013 capital expenditure at the same level as last year at 23 trillion won ($21.5 billion), underlining uncertainty about the global economy and declining demand for personal computers.

The strong South Korean won is also becoming a negative for Samsung. It expects more than 3 trillion won will be shaved from its 2013 operating profit due to the stronger local currency. Samsung's shares fell as much as 3 percent after earnings release.

Increased sales of smartphones were the key source of its profit growth. Samsung, which overtook Apple Inc. as the top smartphone maker last year, said its operating profit from the division that makes and sells smartphones and tablets more than doubled to 5.44 trillion won in the fourth quarter, from 2.56 trillion won a year earlier.

Most analysts believe the Suwon, South Korea-based Samsung shipped more than 60 million smartphones, including the Galaxy S III and Galaxy Note II, during the three months ending in December, which would put the year's smartphone sales at more than 200 million. Apple said it sold 47.8 million iPhones in the quarter.

The company's component divisions that make semiconductor products and display panels also benefited from a rise in demand for smartphones. Sales of mobile processors that power popular devices such as Apple's iPhones and Samsung's own Galaxy smartphones boosted the bottom line.

The recovery in the display panel division was also led by strong sales of advanced mobile-phone screens called OLED, which are mostly found in high-end Samsung smartphones. The display division posted 1.11 trillion won in profit compared with a small loss a year earlier.

Analysts said Samsung will likely see a continued rise in smartphone sales this year, especially in low- and mid-priced models where it doesn't face competition from Apple. Some analysts, including Young Park at Woori Securities, forecast Samsung smartphone shipments to rise as much as 50 percent this year from 2012 to over 300 million units.

Samsung executives said during the conference call with investors that smartphone demand will ease in the current quarter without giving guidance for the company's performance. But analysts said that Samsung could be little affected by market demand thanks to its variety of products that range from affordable to expensive devices.

"Even though they said demand for smartphone will slow down in the first quarter, Samsung will likely buck the industry trend and its own smartphone sales will go up," said Byun Han-joon, an analyst at KB Investment & Securities.

Still, Apple's business has been more profitable because of the high price of the iPhone, which generates a larger profit per sales. Samsung, which makes dozens of handset models a year and customizes them for mobile operators, also sells cheaper smartphones and spends about three times more on expenses such as marketing and advertising costs to promote its Galaxy brand phones and televisions.

Counterpoint Research estimates Apple, though it sold fewer handsets than Samsung, took 70 percent of profit in the handset market during the fourth quarter, while the South Korean rival claimed 25 percent.

Samsung is expected to introduce a new flagship smartphone in its Galaxy S series as early as April, which analysts say will shore up its bottom line. The company said consumers seeking to replace its current handset and get a faster wireless connection through LTE networks will drive the demand for new models, easing concerns that sales would slow because of high rates of smartphone use in developed markets. Part of its strategy to command higher prices from consumers has been adding new hardware features, such as a digital pen in the Galaxy Note series.

Samsung's flexible display technology, which allows tablet computers to fold into mobile phones or bend the edge of the screen, is an effort to make its products stand out from others and to shore up its profit. But such technology, which was shown in public earlier this month in Las Vegas, will still need more time for mass production.