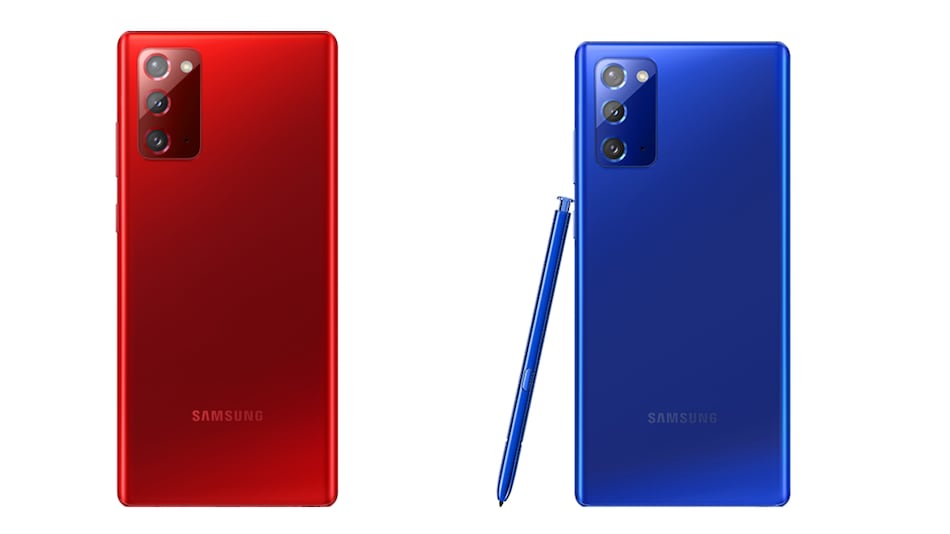 Samsung Galaxy Note 20 that was unveiled earlier this week will be getting more colour options than originally announced. Samsung had revealed that it would be selling the Galaxy Note 20 in Mystic Black, Mystic Bronze, and Mystic Green colours; however, South Korean telecom operators KT and SKT are now teasing Red and Blue variants of the phone, respectively. Separately, a Pink colour option of the phone has also surfaced online. Meanwhile, in India, Samsung is bringing just the Mystic Bronze and Mystic Green colours of the phone.

As per an official teaser on KT website, the operator will be exclusively carrying the Jennie Red colour option of the Galaxy Note 20. This colour variant gets the Jennie Red name from K-Pop star and BlackPink member Jennie who will also be promoting the same. Similarly, SK Telecom is teasing the sale of Blue variant of the Galaxy Note 20; however, the official name of this colour option is currently unclear.

Additionally, a Pink colour variant of the Galaxy Note 20 has popped up online. It has been shared by a tipster on Twitter alongside the live images of the Jennie Red and Blue colour variants of the phone. It is unclear which operator will be selling the Pink Galaxy Note 20 or whether it will be coming to one specific market. Samsung hasn't said anything about the release of Jennie Red or Blue variants outside South Korea at this point.

To recall, Samsung officially unveiled the Galaxy Note 20 and Galaxy Note 20 Ultra earlier this week. The phones succeed the company's Galaxy Note 10 lineup that arrived last year. The phones are set to go on sale starting August 21 in select markets, and are currently listed for pre-bookings in India. Samsung Galaxy Note 20 is priced at Rs. 77,999 in India for the lone 256GB variant with 4G connectivity.