Samsung M40 Image Seen on Official Site Ahead of India Launch, Shows Front and Back Design

Samsung M40 price in India will be around Rs. 20,000, the company has confirmed.

Samsung M40 camera setup will include a 32-megapixel primary shooter

Samsung Galaxy M40, the next anticipated phone by the South Korean giant that has been teased for some time, has now been listed officially on the company's India website. The listing features an image showing a detailed look of the upcoming phone. The image highlights the Infinity-O Display panel as well as the triple rear camera setup. The Samsung M40 is also seen with a traditional fingerprint sensor at the back. To recall, the Samsung Galaxy M40 launch date is June 11. The phone will sit alongside the Galaxy M10, Galaxy M20, and Galaxy M30 models that were launched in the country earlier this year.

The image on the official listing of the Samsung Galaxy M40 clearly shows its front and back. It specifies the key highlights of the smartphone, including the Infinity-O Display, triple rear cameras, and the rear-mounted fingerprint sensor. Further, the back panel appears in the image has a gradient finish with a Blue paintjob. This reminds us of the Gradation Blue colour variant of the Galaxy M30. 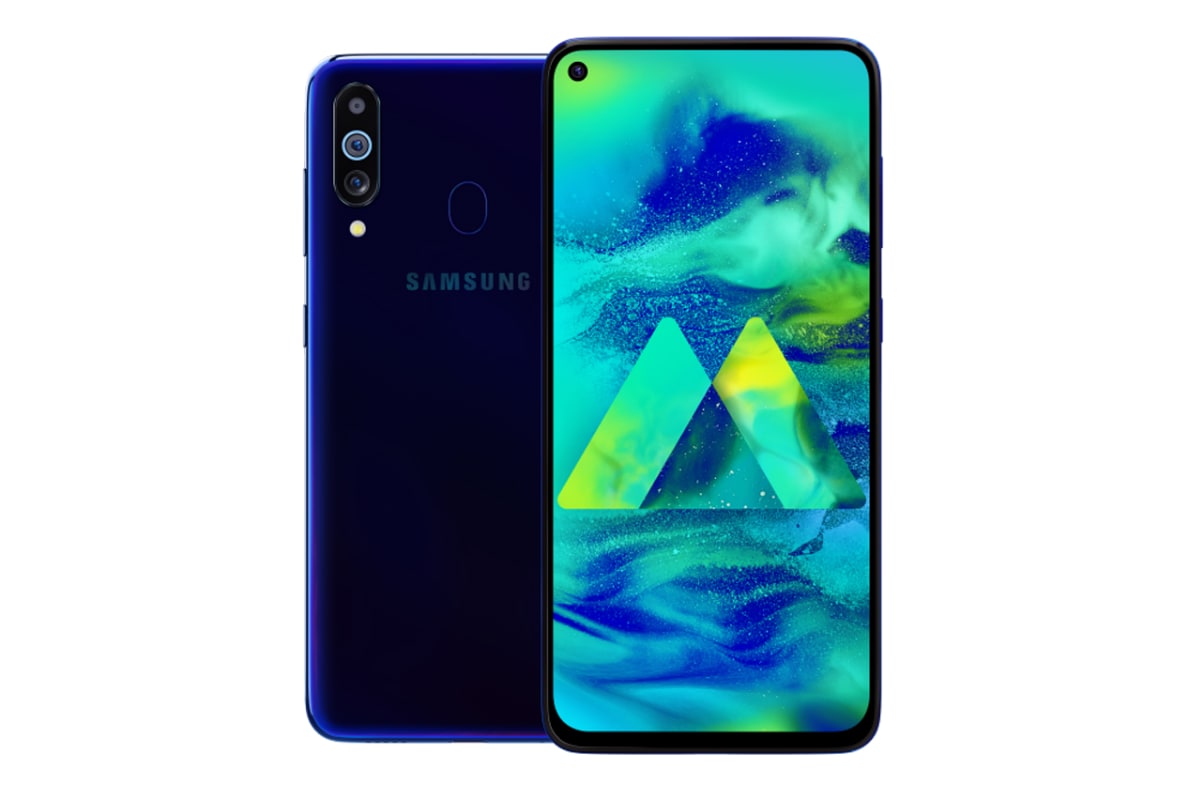 Samsung Galaxy M40 official image showcases its front and back

Alongside the listing on the Samsung India website, a video teaser has been posted on Samsung Mobile India's social media channels that emphasises on the hole-punch camera design, what Samsung calls its Infinity-O Display.

Gadgets 360 on Wednesday reported that the Samsung Galaxy M40 price in India will set around Rs. 20,000. As mentioned, the smartphone is set to debut in the Indian market on June 11. It is expected to go on sale through Amazon.in and the Samsung Online Store in the country.

On the part of specifications, Asim Warsi, Senior Vice President, Mobile Business -- Samsung India, confirmed Gadgets 360 that the Galaxy M40 will come with a Snapdragon 675 SoC and include a 32-megapixel primary sensor on its triple rear camera setup. The phone will also run Android Pie out-of-the-box. Moreover, it will be Samsung's first model to have a "Screen Sound" technology that will produce audio by vibrating the display panel instead of using a visible earpiece.

If we look at some of the early rumours, the Samsung Galaxy M40 will be offered with up to 128GB of internal storage, 5,000mAh battery, and 16-megapixel selfie camera. Other specifications of the phone are a mystery at this point.

Notably, the Galaxy M40 will be the fourth model in Samsung's Galaxy M range that already has the Galaxy M10, Galaxy M20, and Galaxy M30. The company already sold over two million phones in the Galaxy M family since its launch in India back in late January. There were initially the Galaxy M10 and Galaxy M20 that both went on sale in the country in early February.

Samsung M40 Image Seen on Official Site Ahead of India Launch, Shows Front and Back Design
Comment
Read in: বাংলা