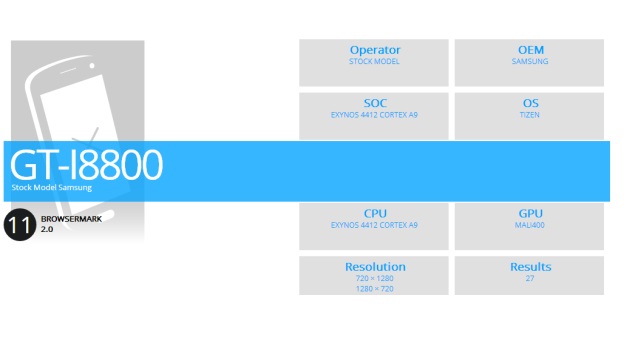 Samsung has been making headlines with rumours of its first Tizen smartphone, currently dubbed Redwood. The alleged Redwood Tizen smartphone has now been spotted in benchmark results with new model number GT-I880, contrary to earlier reports which had hinted the model number to be Z9005. There is not much in terms of specifications, but the results do reveal the processor, and the performance of the alleged Redwood GT-I880.

Unfortunately, there are no other details to be gleaned from the benchmark results of the rumoured Samsung Redwood GT-I880.

On Monday, new features of the next iteration of Tizen 3.0, the Linux-based open source operating system which is backed by Intel and Samsung, were announced.

Among some major changes, the new version will now support 64-bit processor including Intel Architecture and ARM chips, in addition to improved performance and support for more RAM. The Tizen 3.0 update also brings Crosswalk, an HTML 5 application runtime which is based on Chromium / Blink rendering engine which is used in Google's Chrome browser (a fork of WebKit). The next version of the OS is due to release in Q3 2014, while it is estimated that the first Tizen devices would be available by February 2014.

In addition, Samsung also announced that the NFC and Wi-Fi enabled mirrorless camera, the NX300M, as the first Tizen based device. The camera comes with a 20.3-megapixel sensor, a 3.31-inch OLED screen, and ISO sensitivity range between 100 to 25,600 and is currently available in South Korea for 890,000 won ($835).

Apple Maps a success in the US, used by 35 million iPhone owners: Report
Apple's iPhone and iPad chips may soon be produced in New York: Report