While the tech world is anticipating the Galaxy S10 family, Samsung has updated the Galaxy Apps app and rebranded it as Galaxy Store. The new update also enhances the interface with the elements of One UI. The Galaxy Store also features rounded edges -- matching the overall experience of Samsung's One UI that will come pre-installed on the Galaxy S10 models. We may see a mentioning of the Galaxy Store at the Galaxy Unpacked 2019 event later today. Meanwhile, it is already rolling out to some users.

As spotted by some folks on Reddit, Samsung has started rolling out the rebranded the Galaxy Apps that comes as the Galaxy Store. The new update also brings elements of One UI, which is Samsung's proprietary skin on top of Android Pie that it launched back in November last year. The gist behind bringing the One UI treatment to the Galaxy Store could primarily to offer a unified experience on devices running the custom interface.

Importantly, while Samsung has so far provided One UI to its flagship devices through software updates, the Galaxy S10 family, which is launching at the Galaxy Unpacked 2019 event later today, will come preloaded with the new skin. This, thus, makes sense to prepare the stage for the new launch by bringing a redesigned app store. 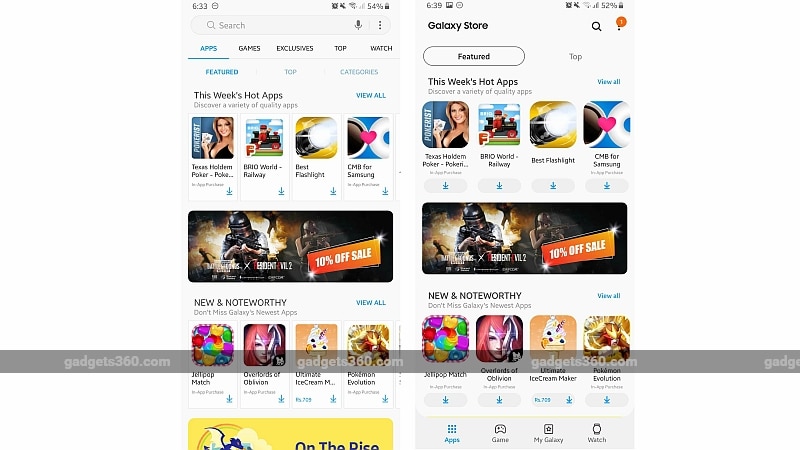 Samsung has also updated the icon and app title to offer a completely rebranded experience on the Galaxy Store. Furthermore, the new development appears to similar to how Google expanded its Material Design theme from core Android components to Google Play and even some of its in-house apps, including the Chrome browser.

The Galaxy Store app is currently rolling out in phases. However, you can experience the new changes by installing the updated version directly by installing its APK file.