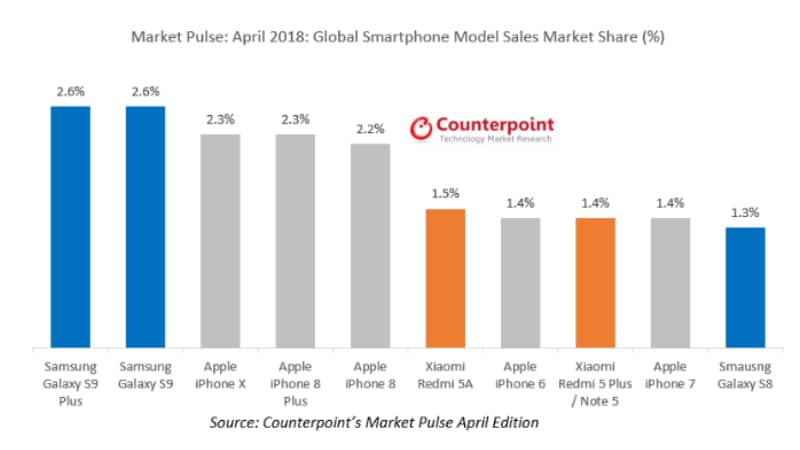 Counterpoint has released its global top selling smartphones list for the month of April, and surprisingly the Samsung Galaxy S9+ tops the list. The second spot has also been grabbed by Samsung with the Galaxy S9, and Apple makes it to the third spot with the iPhone X. iPhone X had been enjoying the top spot all of 2018, and this is the first time it lost the leading spot to Samsung phones. The top ten global smartphones list has Xiaomi's Redmi 5A and Redmi 5 Plus/Note 5 smartphones as well.

Samsung Galaxy S9 and Galaxy S9 Plus catch the top two spots in the global smartphone market share with 2.6 percent each for the month of April. The main credit for this goes to the smartphones' sales performance in Asia Pacific and North America. Also, Apple's decline to the third spot has been credited to seasonality. The tech giant saw a great first quarter, and this period is considered to be a shift that Apple already predicts annually. Apple iPhone X and iPhone 8 Plus take the third and fourth spots with 2.3 percent global market share.

Even though Samsung has increased its market share for the Samsung Galaxy S9 and Galaxy S9+, Apple continues to dominate the global smartphone market occupying five spots in the list. Furthermore, the report states that the demand for the iPhone 7 remains very strong in Asia Pacific and North America regions.

The Samsung Galaxy S8 also finds a mention in Counterpoint's Market Pulse April Edition due to price cuts, along with aggressive marketing and cashback offers, and easy EMIs as well.

To recall, in the Counterpoint Market Pulse March Edition, the iPhone X took the top spot with 3.5 percent market share. The iPhone X dominated the whole first quarter to be the number one smartphone, only to see a fall in April. Even Strategy Analytics declared the iPhone X as the best-selling smartphone in the first quarter of 2018.

After taking the third spot in March with the Redmi 5A, Xiaomi grabbed two spots in April Edition, but didn't make it to the top five. It grabbed the sixth and the eighth position with its Redmi 5A and Redmi 5 Plus / Redmi Note 5 due its performance in China and India.