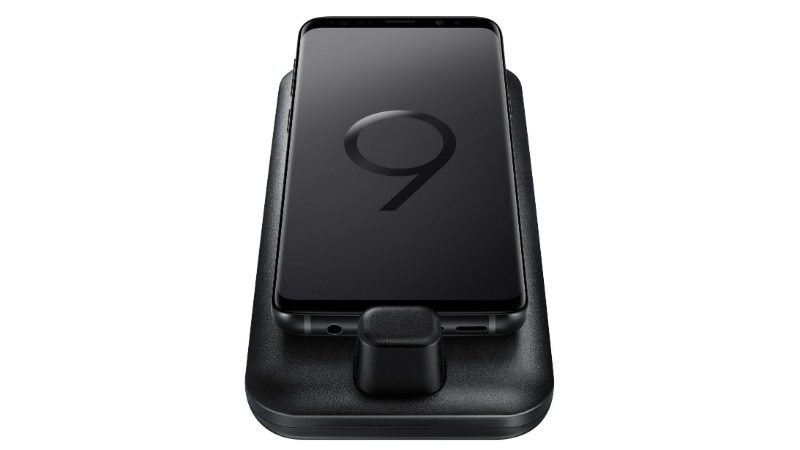 Samsung's upcoming flagship smartphones, the Galaxy S9 and Galaxy S9+, are expected to retain two key features from the previous generation - the 3.5mm headphone jack and possibly the Bixby button. This development comes after a new set of press renders were leaked, which were actually meant to display the new DeX Pad that might be launched for the Galaxy S9 series. The Galaxy S9 duo is widely expected to be unveiled on February 25, just ahead of Mobile World Congress (MWC) 2018 in Barcelona.

Reputed tipster Evan Blass is, once again, first to the scene. In a tweet on Friday, Blass showed off the rumoured DeX Pad for the upcoming Galaxy flagship duo. One of the renders, however, marks the first instance wherein a headphone jack is seen on the Galaxy S9 - at least from a credible source. The image also show that the Bixby button, seen on the last-gen Galaxy S8, will be a part of the Galaxy S9 as well.

The decision to retain the headphone jack, if true, seems to be a "courageous" one considering how Apple and Google have eliminated it from their smartphones. Samsung possibly wants to create a distinction in the premium smartphone range, considering even other manufacturers like Huawei and HTC have ditched the jack in favour of USB Type-C headphones or, better yet, wireless options.

The leaked Galaxy S9 renders also show a USB Type-C port, although that does not come as much of a surprise.

The leaked DeX Pad, the probable successor to last year's DeX, can be utilised to convert the Galaxy S9 into a touchpad or keyboard for a PC. Photos show the DeX Pad has a couple of USB ports, an HDMI port, and a USB Type-C port. The DeX Pad is also reportedly backwards compatible with the Galaxy S8. According to a newer tweet, the DeX Pad is already listed on Tessco's website.

The Samsung Galaxy S9 and Galaxy S9+ are all set to be launched at the Galaxy Unpacked event, just ahead of MWC 2018, in Barcelona. The phones are expected to be quite similar to the previous-gen Galaxy S8 series, except from a few differences including a processor upgrade (Snapdragon 845 and Exynos 9810), new vertical placement for the fingerprint sensor, and camera upgrades.