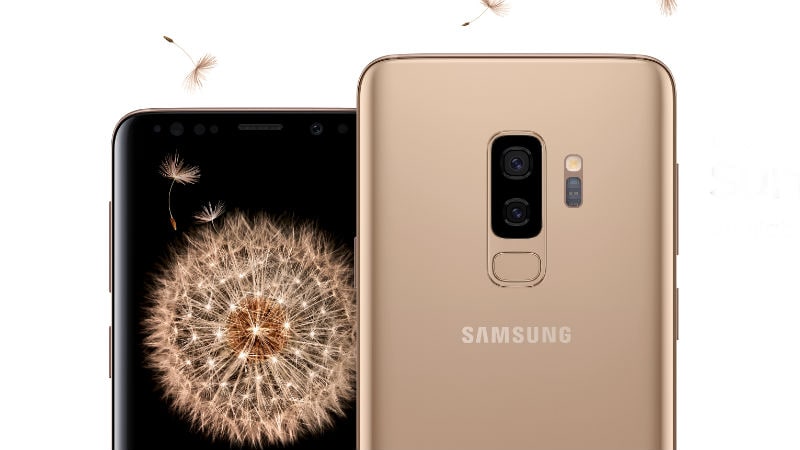 When Samsung launched its latest flagships - Galaxy S9 and Galaxy S9 - at MWC this year, it was expected that the smartphones will come with Google's ARCore support. Well, that wasn't the case from the get-go, and now, the handsets finally support the augmented reality platform. Released as Google's answer to Apple's ARKit, ARCore is a tool for developers to create AR apps for Android devices. With AR slowly becoming a popular technology, the ARCore makes it more accessible. However, earlier it was only compatible with a few smartphones. Separately, Samsung has also unveiled the Sunrise Gold and Burgundy Red colour variants of the Galaxy S9 and Galaxy S9+.

In addition to the Midnight Black, Titanium Gray, Coral Blue, and Lilac Purple colour variants of the Galaxy S9 and Galaxy S9+, the smartphones will now also be available in Sunrise Gold and Burgundy Red models. The Burgundy Red edition will be available in Korea and China starting this month. The Sunrise Gold model will start shipping in June in select markets like Australia, Chile, Germany, Hong Kong, Korea, Mexico, Russia, Spain, Taiwan, United Arab Emirates, and Vietnam. While Samsung noted that additional market availability is "coming soon," it won't make it to India, at least initially.

Samsung decribed one of the new colour models as, "The Sunrise Gold edition for Galaxy S9 and S9+ is Samsung's first device to feature a satin gloss finish which wraps the smartphone in a tranquil glow and glimmer." And, the other variant was detailed as "The Burgundy Red edition is one of the deepest red colors available featuring restrained gloss for added density and a look that is contemporary and traditional - perfect for users who appreciate luxurious design."

Coming to the ARCore support, Google's augmented reality developer platform, was previously available only on Pixel and Nexus handsets and select smartphones from manufacturers like Asus, LG, Huawei, Moto, and Sony. However, an update to the list of supported handsets, spotted by 9to5Google, now shows ARCore support for Samsung's Galaxy S9 and S9+.

Back in March, Google's AR team had informed via Github, "Support for the S9 and S9+ will be added in the next release, which should be released in the coming weeks." Now, Reddit users are also reporting that ARCore works on their Galaxy S9 and S9+ units.

To use the new feature, Galaxy S9 and S9+ users need to download the ARCore app from the Google Play. Further, install any app that utilises the SDK. To recall, Google, in March, announced the rollout of several gaming, shopping, home, and creativity apps based on its ARCore 1.0 SDK. Earlier this month, the tech giant also updated ARCore to version 1.2 bringing several additional new features for developers to play with.