With just two days to go, the hype around Samsung Galaxy S8 and Galaxy S8+ launch is scaling immense proportions. As announced at the company's MWC event, Samsung Galaxy Unpacked 2017 - where the two smartphones will be unveiled - will be held on March 29 in New York, starting at 11am EDT (8:30pm IST). With the momentous Samsung Galaxy S8 launch at hand, the rumour mill has been working overtime, leaving very little we do not know about the upcoming two flagship smartphones ahead of the official event.

The event is set to be live streamed on the Galaxy webpage, and Samsung has not announced any limitations on devices or browsers, so it should presumably work on most devices and browsers worldwide. We have compiled all the information leaked so far on the Samsung Galaxy S8 and Galaxy S8+ launch date, price, release date, specifications, features, and accessories that we know so far. Here's everything you need to know ahead about the two flagship smartphones ahead of the Wednesday launch.

The Samsung Galaxy S8 and Galaxy S8+ are confirmed to launch on March 29, and pre-orders are expected to begin on April 10. This time, Samsung will not prioritise South Korea this time, and will launch the handset globally across markets almost at the same time. Pre-orders are set to begin on April 10, and the handset may go on sale on April 28. However, all of this is based on rumours, and Samsung will throw light on official release dates day after tomorrow.

Samsung Galaxy S8 and Galaxy S8+ are expected to sport 5.8-inch and 6.2-inch Super AMOLED pressure sensitive displays respectively, with QHD+ display resolutions (2400x2960 pixels . Samsung Galaxy S8 is pegged to have a dual-edged curved display with almost negligible bezel and 18:9 aspect ratio; the display may be named 'Infinity Display'. The two smartphones will be powered by the latest Snapdragon 835 SoC, but some markets will get the home-grown Exynos 8895 chip as well. However, Samsung may face some trouble in producing both the chipsets as it is planning a worldwide rollout.

Both the Samsung Galaxy S8 and Galaxy S8+ will be paired with 4GB of RAM, though China and South Korea are said to get 6GB of RAM variants. The devices will run on Android 7.0 Nougat, and support dual-SIM slots. In the camera department, there is expected to be a 12-megapixel dual pixel rear camera, and an 8-megapixel front camera as well.

Samsung Galaxy S8 and Galaxy S8+ smartphones will be IP68-rated for dust and water resistance, support an iris scanner, may sport some sort of facial recognition, and 3000mAh and 3500mAh batteries respectively. Samsung has confirmed both the smartphones will come pre-loaded with a revamped version of its 'Over the Horizon' ringtone. The company has collaborated with Grammy-winning artist Jacob Collier for a more rhythmic and melodious rendition of the ringtone.

As per recent render leaks, the Samsung Galaxy S8 will ditch the Home Button and navigation buttons in the front, and sport a large display screen in the front. The fingerprint sensor is housed at the back right next to the camera sensor, and the logo is printed in the back centre. There is a dedicated Bixby button underneath the volume buttons on the left edge, which will be the first in-built AI assistant from Samsung. Bixby is expected to do a lot more that other competitive assistants, and even work exclusively with native apps like Camera and Messages. How this will help leverage them remains to be seen.

Samsung Galaxy S8 was leaked again today in hands-on images, courtesy AndroidMX. The images reiterate the same story, and also reveals onscreen navigation button, the Camera UI, and also a new shortcut that opens the camera app if you press the power button twice. A recent video leak from SlashLeaks also compares the Galaxy S8 and Galaxy S8+ with other phones like the iPhone 7, iPhone 7 Plus, and the Honor 8 Pro. 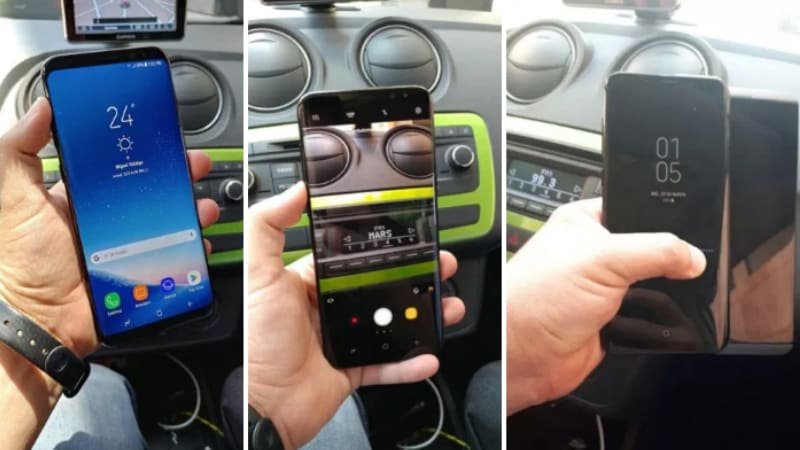 Unlike last year, there won't be an Edge variant of the Galaxy S8. Instead, Samsung has decided to go the Apple route and make the Galaxy S8 available in two sizes, calling the larger size the Galaxy S8+. The only difference between the two is battery, and screen size (and probably a dual camera setup). The devices will be available in different storage options presumably, and that may vary depending on region. Both the smartphones will be launched in at least three colour variants as well - Orchid Grey, Black Sky, and Arctic Silver.

Samsung is expected to launch new earphones replacing the white rubber ones bundled in predecessors. The new earbuds are reportedly made by audio company AKG and will have a braided cable which means less tangling and less prone to attracting dust. The wired earphones have a volume remote control and microphone as well. Samsung is also expected to launch power banks alongside in Blue and Grey shades. The 5100mAh power banks are capable of quick charging, with a ceiling limit of 15W. The power bank carries the model number EB-PG950 and are priced at EUR 60 (roughly Rs. 4,200) each.

Separately, a Continuum-like device called DeX (short for desktop experience) is also rumoured to be launched, which is essentially a dock station that allows you to connect your Galaxy S8 to an external monitor, mouse, and keyboard, and use it on the big screen for improved productivity. The DeX station features two USB Type-A ports, one Ethernet port, one USB Type-C port, one HDMI port, and a built-in fan. The Ethernet port is rated for 100Mbps, while the USB Type-A ports use USB 2.0 speeds. It is reportedly priced at EUR 149 (roughly Rs. 10,500).

Samsung Galaxy S8 Price, Release Date, Specifications, and Everything Else We Know
Comment