Samsung, after the Galaxy Note 7 fiasco, has been rumoured to advance the launch of its next Galaxy flagship. Now, a leaked teaser claims that the upcoming Samsung Galaxy S8 will launch on February 26 thus clearing the air that next flagship launch won't be advanced. According to details shared by Twitter user Ricciolo, Samsung's next Galaxy Unpacked event will take place at the side-lines of MWC in Barcelona, the event Samsung has historically launched its Galaxy S series flagship in.

Unfortunately, the pre-launch teaser has not been made public by Samsung thus leaving us to speculate that this may change in future. Previously, Samsung has officially announced launch details of its flagship Galaxy as well as Note-series handsets. For Samsung, turning consumers focus towards the next flagship makes sense after replacement Samsung Galaxy Note 7 units catch fire. 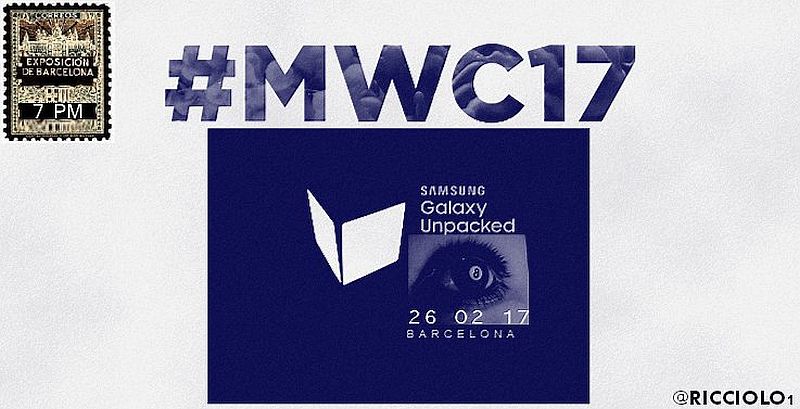 Some of the other details leaked about the Galaxy S8 apart from the purported launch include the inclusion of dual camera setup at the back, as tipped by a pair of trademark applications. The smartphone is said to come with 16-megapixel and 8-megapixel dual-rear camera setup. The trademarks first reported by Galaxyclub showed that the company applied for "LightUp Camera" and another trademark with naming "Light+ Camera." The report cites an excerpt from the trademark that said, "Camera Sensor for use in enhancing the brightness and clearness of digital images and photographs taken in low-light environments."

The Samsung Galaxy S8 is also said to get rid of the signature home button seen on earlier flagship Galaxy phones. One of the starkest changes expected on the Galaxy S8 will be on the display front, as reported by ET News Korea. The smartphone is said to come with the company's first bezel-less design.

Samsung is said to be working on a new design where the front with no home button will be filled with all glass and will also incorporate fingerprint-sensing display. Under the hood, Samsung is expected to pack an upgraded application processor.

"Galaxy S8 will be equipped with half of Snapdragon 830s and half of Exynos that is manufactured by Samsung Electronics' System LSI Business Department," claims ET News Korea.