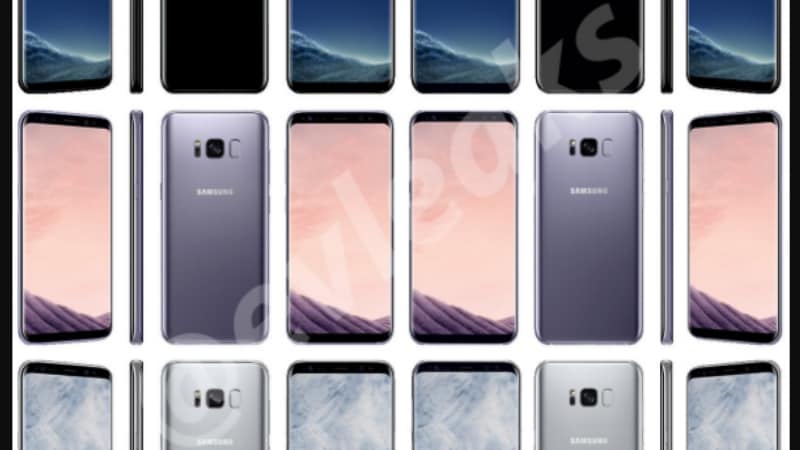 We are now just a week away from the Samsung Galaxy S8 and Samsung Galaxy S8+ launch, and the event is set to happen in New York at 11am EDT (8:30pm IST). There's little that we don't already know about the smartphones, but leaks continue to pour in everyday revealing more details. Today, we get scoop on the desktop experience station, power banks expected to launch alongside, more press render shots, and a video showing off a working unit of the Galaxy S8 from all angles.

First up, tipster @evleaks is back with another press render image, this time of three colour variants - Orchid Grey, Black Sky, and Arctic Silver. The images again reiterate all the same things as previous leaks with the large display, and fingerprint sensor at the back. A separate video leaked by Slashleaks shows off a working Samsung Galaxy S8 unit as well. In the video, the device is shown from all angles and is unlocked using the fingerprint sensor at the back. You can clearly see the Bixby button, but the video refrains from showing how the AI assistant works on the phone.

Separately, Winfuture has leaked the much rumoured continuum-like device called DeX (short for desktop experience). It is essentially a dock station that allows you to connect your Galaxy S8 to an external monitor, mouse, and keyboard, and use it on the big screen for improved productivity. The DeX station features two USB Type-A ports, one Ethernet port, one USB Type-C port, one HDMI port, and a built-in fan. The Ethernet port is rated for 100Mbps, while the USB Type-A ports use 2.0 speeds. It is reportedly priced at EUR 149 (roughly Rs. 10,500); similar to what Evan Blass had earlier reported.

Samsung is also expected to launch power banks in Blue and Grey shades at the March 29 event. Leaked by tipster Roland Quandt, the 5100mAh power banks are capable of quick charging, with a ceiling limit of 15W. The power bank carries the model number EB-PG950 and is priced at EUR 60 (roughly Rs. 4,200)

Prices of the Samsung Galaxy S8 will start at EUR 799 (roughly Rs. 56,000), S8+ at EUR 899 (roughly Rs. 63,300), new GearVR will cost EUR 129 (roughly Rs. 9,000), and new Gear360 will be priced at EUR 229 (roughly Rs. 16,100). The Samsung Galaxy S8 and Galaxy S8+ are expected to sport 5.8-inch and 6.2-inch (1440x2560 pixels) Super AMOLED pressure sensitive displays respectively, and be powered by the latest Snapdragon 835 SoC, but some markets will get the home-grown Exynos 8895 chip as well. The devices will run on Android 7.0 Nougat, and support dual-SIM slots. In the camera department, there is expected to be a 12-megapixel dual pixel rear camera, and an 8-megapixel front camera as well. The Samsung Galaxy S8 will be water and dust resistant, support an iris scanner, may sport some sort of facial recognition, and 3000mAh and 3500mAh batteries respectively.