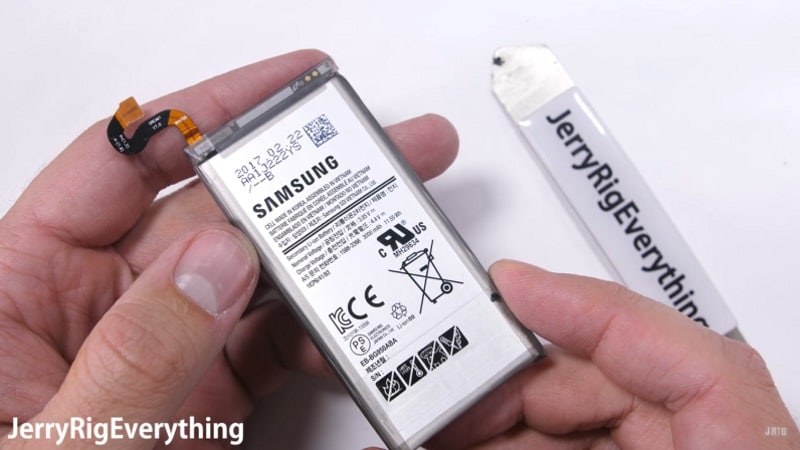 While the teardown of Samsung Galaxy S8 and Galaxy S8+ smartphones revealed that several components inside the devices are easily replaceable, an interesting bit of information has now surfaced regarding the batteries on these devices. The batteries inside these phones reportedly come with an "anti-dog" label and oddly enough, this is not the first time that the South Korean company has put these labels on its batteries.

Before you draw the conclusion that Samsung hates dogs in general, allow us inform you that this label has been made to ensure safety of users as well as their pets. The company's "anti-dog" label indicates that users should not leave the lithium-ion batteries lying around as they can be used as chew-toys by dogs and can cause swelling in the battery or even explosion in some cases, as per a report by The Verge.

Although the new smartphones from company feature a non-removable battery, if you get inside the device, you will notice the label on it. While kids can potentially chew the batteries as well and get themselves into trouble, chances of pets penetrating through the battery with their sharp teeth are higher. The Verge point out that Samsung started putting this symbol on its batteries around the launch of its Galaxy Note 4 and Galaxy S5 smartphones.

As per the report, other smartphone makers including Apple, HTC, Lenovo, Sony, Huawei, Oppo, Xiaomi, HTC, and OnePlus do not put this symbol on their batteries but LG started putting this symbol on batteries in its smartphones from G2 onwards while Nexus devices also seem to come with batteries that bear this symbol.

The whole point of this article is to create awareness that smartphone batteries can prove to be dangerous things if not handled carefully. Considering the explosion cases associated with Samsung's now-discontinued Galaxy Note 7 smartphone, we would advise our readers to take caution while handling these batteries.